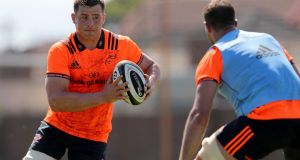 CJ Stander is back on the family farm in George, South Africa, as Munster face the Southern Kings at his local Outeniqua Park on Saturday but since the 27-year-old’s arrival in Ireland, almost six years ago, he has built up what looked an unassailable statistical record.

Stander’s durability is equaled by his consistently high level of performance, regardless of how a game is going, but similar relentlessness is now evident from Leinster’s dynamic duo James Ryan and Dan Leavy.

Neither young man exists on the Stander plain quite yet, but throughout Six Nations and into last weekend’s Champions Cup quarter-finals the former St Michael’s boys continued to produce tackle and carry numbers that show they are capable of scaling Mount CJ.

The story of their breathtaking rise must begin at base camp: Paris, February 3rd, 2018.

Leavy arrived to truck 20 metres off 11 carries (from the same number Peter O’Mahony made a three-metre gain) while Ryan, selected ahead of Devin Toner to partner Iain Henderson, announced his arrival as a world class second row by topping the Irish tackle count along with 15 carries into heavy French traffic. Hardly overshadowed, Stander made an astounding 24 carries for 40 metres including the last brutal rumble to tee up Johnny Sexton’s drop goal.

An injured Ryan missed the 56-19 victory over Italy when Stander (13 carries for 44 metres) kept Leavy (nine runs for just seven metres) in his slipstream.

The 37-27 victory over Wales proved Leavy’s coming of age moment; leading the tackle count with 12 while his 16 carries for 26 metres placed second to Stander’s freakish 21 runs for 43 metres. Interestingly, Leavy’s foot work came to the fore with four defenders beaten as Stander’s bowling ball constantly skittled red jerseys. Ryan’s numbers were significantly lower as, in a clear tactic, he played a decoy role and was first man over multiple rucks.

Afterwards, he was hard on himself when describing how Justin Tipuric and Bradley Davies – 116 freshly arrived Welsh caps – got underneath his six-foot-eight frame. “There was one incident where we were on their line when Leavy made a carry and I’m braced over the ball and I kind of get dominated pretty much,” said Ryan. “Well, I don’t kind of get dominated, I do get dominated.”

Ryan also rejected comparisons to Paul O’Connell. “He’s one of the greats of Irish rugby and to be compared to someone like that is humbling but not appropriate.”

But placing Ryan and Leavy in the “greats of Irish rugby” category became appropriate in recent weeks.

Scotland were man-handled 28-8 in Dublin as the championship was clinched a week early with Ryan’s towering display equaling Stander’s 14 tackles while he stood all alone on 15 carries for 22 metres.

On to Twickenham where Ryan’s 16 tackles edged past Stander and Leavy, although Tadhg Furlong (18) had to settle for second behind Henderson’s 22 hits on the rarest of dominant Irish days in London.

Stander reasserted his dominance in the carry with 24 runs for 35 metres including his famous try but, ball in hand, Leavy and Ryan maintained their double-figure standards.

So, to last weekend, when these Grand Slammers needed to perform against Europe’s dominant clubs since Leinster’s last title in 2012. Stander topped both counts at Thomond Park with 21 tackles and 16 carries, while Leavy and Ryan held up their end of the bargain when combining for the try that put Saracens two scores in arrears. Leavy covered 79 metres with 16 runs to Ryan’s 18 closer-in carries for 28 metres.

Butch and Sundance walked from the Aviva stadium sharing 30 tackles.

“I remember seeing Dan play his schools final [in 2012] against Clongowes and it was like the Byrne brothers (Ed and Bryan) were carrying and Dan was tearing the ball from them the whole time,” said the Leo Cullen, usually cautious when speaking about young talent.

“Good players thrive on competition. If it is handed to them on a plate I don’t think it is necessarily better for their longer-term development, so he has had to push through hard but you are seeing the quality performances he is putting in at the moment.

“James has been earmarked for quite a while,” added Cullen. “Such a big physical specimen but he has got a great mindset in terms of looking to improve and he’s very competitive on the field. Unbelievably young man, so hopefully he is going to get better and better.”