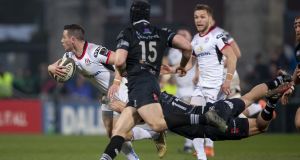 Ulster’s John Cooney in action against Ospreys. The 28-year-old claims four statistical accolades as the league’s top points scorer (160), most try assists (10), most penalties (30) and the most passes (1410). Photograph: Morgan Treacy/Inpho

John Cooney is the statistical winner in the inaugural regular Pro14 season.

The decision by David Nucifora to deny Ruan Pienaar a final contract caused a rare show of total unity in Ulster Rugby last year. Every tier of the Belfast structure complained about the IRFU decision to force another Dublin-born scrumhalf, via Connacht, on them in place of their Springbok hero.

It will never be known how great a loss Pienaar has been but Cooney was a revelation throughout Ulster’s annus horribilis.

He came second in the “clean breaks” category with 24, two shy of the Ospreys Canadian winger Jeff Hassler, and also showed his versatility when shifting on occasion to outhalf.

Cooney’s international credentials can only be boosted by the proposed rerouting of Joey Carbery, another player produced by the Leinster schools system who is struggling for game time in his home province.

Capped by Joe Schmidt against Japan last June, Cooney was subsequently overlooked for the November internationals and Six Nations but next season he should put renewed pressure on Kieran Marmion and Luke McGrath to be the recognised Conor Murray understudy.

Despite Barry Daly’s injury-disrupted season, the Leinster winger is top of the try-scoring table, on 12, two clear of Cheetahs winger Makazole Mapimpi.

Tom Farrell’s return to Ireland, after a few seasons in England, has been a less heralded success with the Connacht centre the joint-leading ball carrier (228) alongside Ulster’s departing All Black Charles Piutau. Farrell must be in and around Ireland midfield conversations after 44 successful offloads. That’s 14 more than Piutau.

But the real focus this season was on the new arrivals. Last summer when two South African sides, the Cheetahs and Southern Kings, were dropped into the Pro 14 after a rapidly agreed expansion, only made possible by the injection of TV money, those further down the food chain were naturally suspicious.

The major concern was these struggling franchises, cut loose by Super Rugby, would worsen the standard of the old Celtic League just as both Italian teams were finally showing signs of improvement. The powers-that-be assured the media the opposite would eventually occur.

“We will continue to look at expansion but expansion has to work in different areas,” said Pro 14 chief executive officer Martin Anayi,  “The teams need to be competitive and it needs to work commercially. If any of those things aren’t present you shouldn’t expand.”

A statistical analysis of the regular season shows this risky rebrand has proved a success and a failure in equal measure. The Southern Kings are bottom of the pile in more statistical categories than any other team but the Cheetahs have upheld their end of the bargain with an entertaining attacking style that puts them up against the Scarlets in this weekend’s play-offs.

So everyone was right.

The Kings did lead one individual category:  Bobby de Wee made more tackles (262) than anyone else.

That aside, they struggled to register just one victory in 21 outings while averaging two tries per game with a lowly average of 14 minutes in possession.

The Cheetahs enhance the argument for further South African expansion into European rugby. They were so good they even managed to lure 25-year-old Springbok outhalf Johan Goosen out of retirement. They don’t top any of the statistical charts but place second behind Glasgow with the most average points (29), averaging 3.6 tries per game and only the Cardiff Blues returned superior goal-kicking percentages.

Interestingly, Munster propped up the place-kicking list with a terrible 67.57 percent success rate.

Statistically, Glasgow are the best team across both conferences with the highest points, metres gained and clean breaks. Leinster were the only side to average four tries per game but their numbers take a hit due to the use of 55 players as they also backboned Ireland’s Grand Slam.