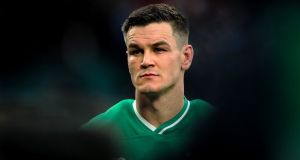 Ireland captain Johnny Sexton has been the target of some baleful diatribes on social media. Photograph: James Crombie/Inpho

The 2002 Six Nations is increasingly providing uncomfortable pointers toward the 2020 version, although it is to be fervently hoped things don’t pan out the same.

It was Eddie O’Sullivan’s first campaign after being promoted from assistant coach to head coach. Only the order of Ireland’s biennial itinerary was slightly different, as handsome home wins over Wales (54-10) and Scotland (43-22) sandwiched a 45-11 beating in Twickenham.

In the penultimate round, Ireland hosted Italy and won 32-17 before going to Paris and facing France in the Stade de France. It was a good Irish team. Keith Wood packed down between Peter Clohessy and John Hayes. Malcolm O’Kelly was in the second row beside Gary Longwell. Current Irish defence coach Simon Easterby was alongside David Wallace and Axel in the backrow. Peter Stringer and David Humphreys were at half-back.

Rob Henderson and Brian O’Driscoll, hat-trick hero at the same ground two years previously, were in midfield and the back three was made up of Denis Hickie, Shane Horgan and Girvan Dempsey.

However, Les Bleus were going for the Grand Slam, and they scored a seven-pointer in the second minute before going on to complete a 44-5 win. It remains the biggest win in the 98 matches between the two countries.

Their then head coach was Bernard Laporte, the current FFR President who has assembled and empowered the most impressive French coaching ticket in yonks, perhaps ever.

Having finished second in 2001, Ireland finished third, in what was widely seen as par for the course or at any rate not a disaster, even though they had beaten France in each of the previous two years and had lost to them by just a point and two points in 1998 and 1999.

If things do indeed pan out similarly to 2002 this time around, such a reaction will hardly apply this time. Although three home wins might have seemed a satisfactory outcome at the outset of this first Six Nations under Andy Farrell, were it to come with a defeat on even half the 2002 scale in Paris, one ventures the verdict will be altogether more damning.

In the 18 years since that 2002 defeat the landscape has shifted so wildly that there seems to be an incessant need to either lionise or pillory this Irish team.

So it was that the 2018 Irish team was the greatest of all time (and it was certainly the highest achieving of all time, whether or not it was the most talented) whereas the 2019 version was the worst ever. Likewise, the squad may as well have been sent home after losing to Japan at the World Cup, only for them to be given a serious chance of beating the All Blacks in the quarter-final, whereupon it was back to being an all-time low.

Reactions to every Irish win and Irish defeat appear to be almost as fickle as the wind.

Back then, the even-yeared biennial itineraries which encompassed treks to Paris and London were pretty much written off before they even began. The O’Driscoll-inspired win over France in 2000 had been Ireland’s first over France in 17 years, and first in Paris since 1972. Ireland had won once in Twickenham since 1982. They were graveyards.

Although Ulster had won the European Cup in 1999, this was before Munster’s two Heineken Cup successes, Leinster’s quartet of wins and Ireland’s four Six Nations’ titles, including two Grand Slams, in a decade, not to mention those historic two wins over the All Blacks, a series win in Australia and wins over South Africa at home and away.

As a result, expectations have risen to the point where Irish supporters saw the team as genuine contenders to win the World Cup, and ditto every Six Nations. While some have been balanced or at least maintained a critical tone despite the underwhelming win over Scotland or the bonus point win over Wales, a popular view lurched from defeatism to wild optimism and back to tearing up the script and with it this team after last Sunday’s “disaster”.

It’s mostly Joe Schmidt’s fault. (Indeed, one need only look at how his reputation suffered after 2019.) Yet, as Johnny Sexton said in an interview with the Sunday Times two days ago, “ultimately when people look at the nine years he (Schmidt) coached in Ireland, they’ll think: ‘Holy crap, how did he do that?’”

And with increased success has come increased numbers following the game, with more media coverage of the sport in Ireland. With this, of course, has also come the advent of social media, which has given an outlet to the more numerous supporters of Irish rugby, and the immediacy of knee jerk verdicts. Perhaps, as a result, this has influenced the tone of the media coverage. Increasingly, everything is the best of all time or the worst.

It seems, more than most seem to delight in vilifying this Irish team in the light of a defeat

So it is that these “highly paid professionals” have let their country down in some eyes. The team should be disbanded, and younger players should be given their chance. Presumably if that doesn’t work, then that team should be largely replaced too.

Rugby is not unique. Plenty out there seem to revel in Rory McIlroy’s relative ‘failures’ to win more majors. Brian Cody’s ship had supposedly sailed three years ago, since when Kilkenny have won a League title and reached an All-Ireland final. You think of the treatment Arsene Wenger suffered. For sure, there’ll never be another Alex Ferguson, not least because no other manager would be given four trophyless seasons at a ‘big club’.

Yet, it seems, more than most seem to delight in vilifying this Irish team in the light of a defeat.

The tweet of the weekend, no doubt sardonic, thus belongs to former Irish tighthead Mike Ross over a screenshot of some of the more baleful diatribes against some of the best Irish players of all-time, including probably our greatest outhalf.