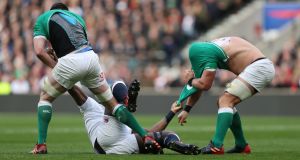 England’s Maro Itoje scuffles with Ireland’s James Ryan and CJ Stander. Itoje was everywhere, his hands all over the fixture and he wasn’t alone. What a quality athlete and rugby player England have in their No 4 jersey. Photograph: David Davies/PA

From the start, England laid their cards on the table. Electing for a split kick-off, with number eight Tom Curry sitting in behind George Ford, the outhalf found CJ Stander and Curry had only one target on his mind. Smash Stander.

The Irish number eight spotted the danger and passed a lovely left hander to Conor Murray and Ireland cleared. But the tone was set by Curry because England had their plan – kick into the Irish 22, starve Ireland of time and space and stay there. Go forward when you have the ball and go forward when the opposition have the ball.

With less than 90 seconds on the clock Ireland had kicked twice to escape from their 22. England had already kicked three times to help pin them back, including a ‘beauty’ from George Kruis! After two minutes England’s kicking already totalled five. As I noted on Friday, we should not be fooled by Eddie Jones. England kick and they kick a lot.

The end product was Ireland were rooted in their 22, under immense pressure and playing any form of rugby under the white blanket was almost impossible.

Conor Murray scampered back to save Ireland. Johnny Sexton did likewise, ditto Jacob Stockdale but the ball eluded them as England’s scores continued. Jones’s team do love to kick the ball, but this was a master class in clever use of the boot and at odds with how Ireland kicked under pressure.

Consequently, the English back three had a much more pleasant afternoon than expected, with no aerial pressure at all on the centre-cum- first time winger Jamie Joseph.

I also mentioned on Friday that, in Paris, England had spent nine times longer in French 22 than France could manage in England’s. And Jones clearly wanted to repeat that stat in Twickenham but with a difference – Manu Tuilagi. Off their lineouts, England varied the target and oscillated between off the top ball and down and give with the aim to confuse the Irish midfield defence, making the Tuilagi carry almost impossible to stop.

Their second lineout afforded Tuilagi a hole between Josh van der Flier and Sexton and off England went. His influence faded over time but his impact on the fixture remained huge. As this damage was being done, all the play was in Ireland’s half, as were all the breakdowns, subsequent turnovers and pressurised exits.

What is success? The scoreboard, performance, new culture, set piece, team selection or winning? During these pressure moments the scoreboard and the set piece are invaluable to gain a foothold.

Ireland’s first real visit into England’s half came from a lineout on 10 minutes. Due to the lineout crossing the 15 metres line Maro Itoje was able to neutralise and ruin the Irish platform.

A word or two on Jaco Peyper. Firstly, why he was so patient with the running commentary and ‘feedback’ which bordered on being lectured by players is a mystery. He engaged and the players kept lecturing and questioning.

But on a precious attacking lineout, Ireland hit Devin Toner at the front with a great maul set up which soon got marching forward. A penalty was awarded but no card and no penalty try? An extremely cynical play from England should be treated as thus especially as the eventual penalty was missed.

Off their subsequent 22 metre kick-off, Tuilagi mimicked Curry and this time did smash Stander, who survived the hit but the English were not letting up.

Ireland’s scrum looked teak-tough until Tadhg Furlong exited. How we go about resolving this is intriguing. Should Andrew Porter slip back to loosehead. Should Munster’s John Ryan come back? Or should we simply acknowledge the brilliant closing scrum led by Ellis Genge and Luke Cowan-Dickie.

Courtney Lawes won man of the match but Itoje was simple peerless. His ability, as a secondrow, to starve top class international Irish backs of space and time out in the midfield areas, their areas, by reading their intentions and dominating their space was only part of the story but a wonder to watch. Under this pressure, Ireland stopped running onto the ball, taking it standing and making life even more difficult for their attacking shape.

Itoje was everywhere, his hands all over the fixture and he wasn’t alone. What a quality athlete and rugby player England have in their No 4 jersey. If this is the template then our current secondrows have a job ahead of them to attain that level of athletic influence over a fixture across the full width of the 70m pitch. Maybe that’s unfair and we should just marvel in Itoje’s athletic brilliance and how he chooses to use it.

With all this pressure and field position, is it a tad harsh to query why England didn’t score more tries? Certainly the Irish defence deserve credit when despite all the line breaks and missed tackles they limited the English to 24 points. Or maybe there’s a story behind England in how Jones wants them to play. Get into the opposition 22 by kicking the leather off the ball and stay there as long as possible.

Their return from this tactic will improve over time, but only if Jones frees the ball a wee bit more. But the immediate question is how do Ireland cope with such a tactic imposed upon them? This, having been beaten thrice in such fashion, is the key question for Andy Farrell and his Irish team.