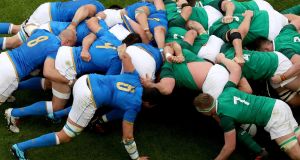 Minister for Health Simon Harris has said the game between Ireland and Italy is something that needs “considerable consideration”.

Minister for Health Simon Harris has raised doubts over whether Ireland’s Six Nations match against Italy will go ahead in Dublin next month due to concerns over the spread of the coronavirus.

Harris’s comments followed a special meeting of the national public health emergency team on Sunday night in relation to the spread of the virus in Europe. Reviews of mass gatherings are also set to take place in the coming days, particularly the Ireland v Italy Six Nations rugby match which is scheduled to take place at the Aviva stadium on March 7th.

Harris said all mass gatherings were being kept under review but there were no plans to cancel events yet.

“The rugby game is something that needs considerable consideration,” he said. “This situation is evolving. The weekend’s activities have shown that there is still an awful lot unknown about the coronavirus and about the path it might take.

“There will be some big decisions that have to be made in the coming days including mass gatherings. Most particularly, I’m thinking of the Ireland-Italy rugby game that’s due to take place in the not-too distant future.”

Pro14 matches in Italy involving Ulster and the Ospreys have already been postponed due to restrictions enforced by authorities dealing with the coronavirus outbreak in Italy. Ospreys were due to play Zebre at the Stadio Sergio Lanfranchi in Parma on Saturday, with Ulster set to face Benetton at the Stadio Monigo in Treviso later the same day.

Plans are being made to reschedule both round-13 fixtures.

“To ensure the safety of our players and spectators Pro14 Rugby fully supports the preventative measures taken in Italy and will adhere to the directives from the World Health Organisation (WHO) and local authorities,” read a statement on the Pro14 website.

“The current restrictions are in place until March 1st and Pro14 Rugby will remain in contact with the FIR (Italian Union), Zebre Rugby Club, Benetton Rugby and World Rugby to monitor (the) situation on a daily basis.”

Restrictions on public gatherings and sporting events put in place by the Italian authorities apply in the Lombardy, Emilia-Romagna and Veneto regions. A Women’s Six Nations game and four Serie A football fixtures were postponed over the weekend. - additional reporting PA