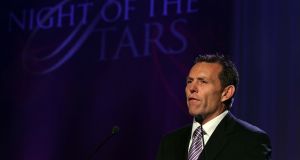 Former South Africa outhalf Joel Stransky has labelled World Rugby an “old boys’ club” and questioned the process to select the 2023 World Cup hosts after France were surprisingly handed the staging rights in London on Wednesday.

South Africa had been unanimously recommended by the Rugby World Cup Board to host the tournament after an extensive evaluation of the three bidders, which also included Ireland, but lost a World Rugby Council vote 24-15 to France after the Irish dropped out in the first round.

France last staged the event in 2007, while South Africa has not hosted the World Cup since 1995 when Stransky landed a winning drop goal in extra-time of the final against New Zealand.

“We are all bitterly disappointed and quite shocked,” he told South African TV channel SuperSport.

“You can only imagine the lobbying that has gone on behind the scenes and the one thing that it does fix in my mind is that it is an old boys club still making decisions at World Rugby.

“Ultimately, your bid can be as good as you like, but you have to lobby to get those blokes on your side. Which means nothing has really changed, so what is the point of having an independent auditor if you are not going to take the recommendation?”

World Rugby had included an independent evaluation for bids in order to make the process more transparent, but the ultimate decision was still made by secret ballot.

Former Springboks winger Ashwin Willemse, who was in the squad when South Africa last lifted the William Webb Ellis trophy in France in 2007, believes the recommendation of the Rugby World Cup Board should be binding, something SA Rugby will push for in the future.

“What made South Africa the preferred host was their bid, nothing more,” Willemse said. “Apples were (compared with) apples and we came out on top. So how do you win a bid, on the basis of what?”

John Smit, South Africa’s captain in 2007, said: “That is devastating news, the joys of a secret ballot.”

It’s a further blow to the rugby fraternity in the country as it comes at a time when the sport really needed a boost following drubbings at the hands of New Zealand and Ireland, as well as losses to Italy and Argentina.

Rugby is not in a good place in South Africa and the feeling was largely that they needed this World Cup to boost the game in a country which has won the tournament twice and last hosted it in 1995.

However, for the fourth successive occasion they lost out on hosting rights after comprehensively being beaten by France in the second round of voting by 24 votes to 15, following Ireland’s earlier elimination.

“We are bitterly disappointed at this decision and would like to apologise to the people and government of South Africa for raising their hopes,” said Mark Alexander, president of SA Rugby.

“We did everything in our power to bring the tournament to South Africa and we expected to have that right confirmed today.”

A statement on SA Rugby’s official Twitter account read: “SA Rugby said it was ‘bitterly disappointed’ at the decision by the World Rugby Council to overturn a recommendation that South Africa should host the 2023 Rugby World Cup and instead voted for France to host the tournament in a secret ballot.”

However the feeling of disappointment was not shared across South Africa with many people of the opinion that the country has much bigger issues to deal with than hosting a Rugby World Cup.

Despite World Rugby’s report giving South Africa the same mark in terms of security as Ireland and France, crime is rife across the country and a current ranking of 123rd in the Global Peace Index led many to question World Rugby’s evaluation.

South Africa received an overall score of 78.97 percent to 75.88 for France and 72.25 for Ireland on a selection of weighted criteria but Council members were free to ignore the report if they wished.

South African finance minister Mayihlome Tshwete tweeted: “Look, it would have been nice but we have more pressing issues that hosting the Rugby World Cup.”

Meanwhile, Julius Malema – the leader of the Economic Freedom Fighters political party – said “Thank you France, we are doing just fine. Not disappointed at all”.

Jurie Roux, CEO of SA Rugby, ruled out any suggestions that his organisation might challenge the vote.

“We have said throughout that we would honour both the letter and the spirit of the process and we now consider the 2023 bidding process closed.

“However, in the feedback sessions I am sure we will be recommending to the World Rugby Council that the verdict of the evaluation committee become binding.

“World Rugby ran an exhaustive and transparent process for 15 months to identify the best host nation, only for the process to go entirely opaque for the past two weeks. The view of the experts and World Rugby’s leadership was overturned by World Rugby council members.”