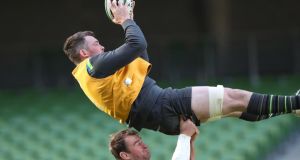 This should be interesting. To the backdrop of a feisty off-field battle for the 2023 World Cup, with fourth place in the world rankings at stake and mindful that they could meet in the World Cup quarter-finals less than two years hence, as friendlies go this doesn’t look too friendly.

A tad unsettlingly too, Ireland are favourites despite a few unknowns. Yes, they are a high-achieving team with a particularly strong home record, and a capacity Aviva at the ideal tea-time kick-off should be in expectant mood.

But they’ve been in relative cold storage since March, and while they have familiar and proven combinations up front and at halfback, the same could even be said of the reprised Connacht midfield pairing of Bundee Aki and Robbie Henshaw.

In addition to Aki making his debut, Jacob Stockdale and Andrew Conway are relative newcomers, and the presence of Joey Carberry and Darren Sweetnam adds to the callowness of the backs.

What to make of South Africa? Not only are they comparatively match-hardened compared to their annus horribilis of 2016 when they lost eight of 12 matches, in nine matches this year they have lost only twice and both times to the All Blacks.

Admittedly, one of those was a record 57-0 thrashing in Albany, and aside from beating an under-strength and weary French side at the end of their season 3-0, the Springboks beat Argentina twice and drew with Australia.

One can take the view that it showed remarkable resilience to rebound from that All Blacks mauling by drawing with Australia and then losing 25-24 to New Zealand in Cape Town a month ago or that the All Blacks had already won the Rugby Championship, were missing Brodie Retallick and a few more, and lost Beauden Barrett.

Still, it was a commendably resilient performance, with the Boks’ defence keeping them in the game. They lorded possession and territory, restored their line-out to full effectiveness with the inclusion of Pieter-Steph du Toit, nominally a lock, in the backrow, where he is retained today.

Their back play is limited but they also tempered their more ambitious wide game by resorting much more to type, ie hard and straight running, matching this with their ferocity across the gain line and at the breakdown. We can expect more of the same today, and they do offload more than when these sides met in June of last year.

Backing up a strong pack is a strong bench, particularly in the frontrow, and they are clearly a stronger side than in last year’s three Test series, which they won 2-1 after three six-point games.

Their improvement is most obvious at hooker, where the emergence of the human dynamo, 23-year-old Malcolm Marx, has prompted his predecessor Adriaan Strauss to describe him as “world, world, world-class”. It’s not just a blinkered Boks’ view either. Aside from the traditional power and ballast one expects of a beefy Boks hooker, he has all the skills one would expect of a one-time flanker and centre.

In that recent meeting with the All Blacks, Marx not only completed the 80, but was scoring a try in the 79th minute with his 14 carry, from which he made 65 metres, to augment three clean line breaks, including a try-scoring pass, beat three defenders, offloaded twice, won four turnovers (he’s a quasi openside over the ball) and made 12 tackles.

So he must have dodgy darts? Nope, and that day he nailed 13 of 14 line-outs.

Rory Best will have his work cut out, and knows it.

“He seems to be the total package. He can carry, he can throw, the South African scrum is very strong, which he’s a part of,” says Best.

“I think he’s a real example of how the modern day hooker is changing and I think he started off his career playing in the backs, in the centre somewhere, and you can see that in the way he plays. And that’s what’s expected now of the modern hooker. It’s probably not a bad thing that I’m 35 and not 15 or 16,” said Best, typically self-deprecatingly.

Best and Ireland are going to have to be smart to punch above their weight against a much more match-hardened unit, who have effectively been together for four months. They’ll have to be disciplined too. Another relatively unknown in this game is the appointment of the highly regarded 28-year-old New Zealander Ben O’Keeffe, who is a doctor.

But under Joe Schmidt, they have repeatedly shown an ability to play smart, to be well prepared even in the first game of a new window – they beat the All Blacks in Chicago with less preparation than they had for this one.

Schmidt has still assembled an in-form collection of forwards featuring seven Lions, and we can reasonably anticipate Sean O’Brien, on his 50th Irish Test, scaling his form of the Lions’ Test series.

In the presumption that Ireland can cope with South Africa’s power game, they look to have the better aerial game and most of all, Ireland have a more proven and complete halfback pairing. Conor Murray rarely puts a foot wrong nowadays, invariably making the correct decision and executing it, while causing real damage with his kicking game and selective running game. His challenge now is almost to have the perfect game.

Ditto Johnny Sexton, and it’s the capacity of the Irish halfbacks to make the correct call and execute, especially at critical junctures, which can steer this somewhat rejigged Irish team home. All the more so if Aki chips in with a game-breaking play or two, with Henshaw perhaps the prime beneficiary.