Iain Henderson holds reminders from series that got away 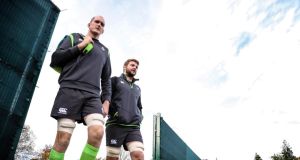 Even Iain Henderson finds it hard to credit that he made his debut all of five years ago, at the age of 20, in the corresponding Guinness Series opener at home to South Africa at the Aviva Stadium.

He was effectively in his rookie season with Ulster, for whom he had only played six games, when he was not only called into the squad, but brought on as a 70th minute replacement for Peter O’Mahony in a game Ireland lost 16-12.

“I just remember because I had only really started playing for Ulster at the time. I thought it was very bizarre,” he admitted this week, before recalling his counterpart that day was someone who had since become a team-mate if all too occasionally.

“Interestingly, my opposite number (20) was Marcel Coetzee. I had a good chat with him afterwards, and I’ve got his jersey in my house that I swapped off him that day. Coming off the bench with Donncha O’Callaghan, there was a fair few new caps that day – Michael Bent, Richardt Strauss got his new first cap that day, so it was a brilliant experience five years ago now.”

Reflecting further on that day, he added: “I was young and raw and inexperienced, and probably didn’t have a bit of a clue what I was doing. That’s what I think now, looking back. But it was obviously a coach who had faith in me and sort of saw what they could potentially mould out of this 20-year-old kid who didn’t really know what he was doing. Looking back I loved it at the time. It was fantastic.”

Henderson is a relatively experienced test match animal now, with 32 caps to his name, which also includes starting all three tests in the 2-1 series defeat to South Africa on last year’s summer tour. The abrasive Springboks’ captain Eben Etzebeth was opposite him in all three tests, and is a foe from the Under-20 World Cup.

“In Italy [2011], yea. He was a year above me. Unfortunately both of the games didn’t go our way,” recalls Henderson.

“You could tell when he was younger that he was a natural leader and a leader who captains through what he does rather than speeches or trying to emotionally rile guys up. Obviously that’s from an outsider’s point of view. I’m not sure what he’s like to play alongside, but you can tell he’s a massive presence to play alongside.

“His performances add to his presence and size and the way he carries himself, and I’d say the work he does off the pitch would probably match that to make him the player that he is.”

But that defeat in South Africa is still the series that got away.

“The first game was fantastic; 14 men for a lot of the game, 13 for some of it, and still to come out with a win. Then being so far ahead in another test and slipping off it was something that was massively frustrating.

“We could have made history going down there to be the first team to turn over South Africa in an away series. But that’s something a wee bit annoying for us, and something we realise it was in our hands to take it. It slipped off the ball in the second half.”

They remain reminders as to how a test match against South Africa can slip away.

“Having played against him three times last summer we know that’s something we’ve learned lessons from. Probably good lessons and bad lessons; lessons in how to shut them down and lessons on how maybe, if you don’t shut them down, they can definitely take hold of the game pretty easily.

“We have to look back to other games we played where we’ve had to shut down big threats, be it in the Six Nations or previous tours.”