Rugby World Cup 2023: Was this how the votes broke down?

While Ireland got the backing of England, they did not get votes from Scotland or Wales 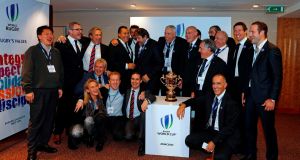 Members of the French bid including President of the French bid Claude Atcher (C) and French rugby President Bernard Laporte (C-R) pose with the trophy after France was named to host the 2023 Rugby World Cup in London. Photo: Adrian Dennis/Getty Images

The process is over, the decision is made and the 2023 Rugby World Cup will be played in France.

In truth the die was cast for Ireland after the World Rugby evaluation process recommended South Africa and, in the end, the bid proved to take a hammering in being eliminated in the first phase of voting with just eight votes.

While the voting process was a secret ballot, the build-up and lobbying allows us to have a decent idea of where the votes went.

“The bottom line is that we were disappointed that Scotland and Wales didn’t vote for us,” Browne said. “They had reasons. Scotland wanted to go for the money and Wales wanted to effectively support Gareth Davies, who was part of the evaluation process.”

Despite World Rugby recommending South Africa to host the tournament, the voting process went the opposite way with France winning by nine votes in the end as even the African vote went against South Africa.

*Oceania believed to have split its vote