Ireland, South Africa or France will be awarded RWC 2023 at today’s vote 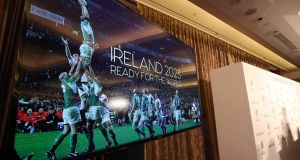 After a process that started in 2013, Ireland’s hopes of hosting the Rugby World Cup in 2023 boil down to today’s vote of the World Rugby Council at Kensington’s Royal Garden Hotel in London.

South Africa are in pole position having been recommended by World Rugby’s technical evaluation at the end of last month, but it would appear Ireland and France are still very much in the race.

Who is entitled to vote?

The Tier 1 nations not involved in the bidding process - England, Wales, Scotland, Italy, Argentina, Australia and New Zealand - have three votes each. Japan and the regional associations - Oceania, South America, North America, Africa, Europe and Asia all have two votes. And the other unions - Canada, USA, Georgia and Romania have a single vote each.

How many votes are needed to win?

With 39 votes to be cast, a simple majority of 20 is required to get one of the bids over the line. If that is not achieved in the first round of voting, the country with the fewest number of votes will drop out of the process with the winner of the second vote winning the right to stage the tournament.

What happens if all three countries receive 13 votes in the first round?

In the event of this happening, even after a recount, then South Africa will advance to the second round by dint of them having won the recommendation. World Rugby president Bill Beaumont will then be required to eliminate either France or Ireland.

Will votes be cast in public?

No, it is done by secret ballot with the votes counted by an independent auditor. Members of the World Council will then move to another room where the three bidding teams are waiting, before the verdict - until this point unknown even to council members - is announced.

What time can we expect to see some white smoke?

World Rugby are due to reveal the 2023 tournament host at 1pm.

Having received the endorsement of World Rugby, South Africa should get it, right?

In theory, yes, but it’s by no means a foregone conclusion. Like all secret ballots following the frenetic behind-the-scenes lobbying, the vote could yet be both dramatic and unpredictable.

Who are the favourites?

Having been long-odds outsiders before the evaluation, South Africa are now heavy favourites (1/3) although their odds have drifted in days. France are second in the betting (10/3) with Ireland, odds-on before the report was released, now at 11/2.

So how can we expect the voting to pan out?

This, obviously, is by no means an exact science, but Irish Times rugby correspondent Gerry Thornley, has broken it down as follows.