IRFU will not bid for future World Cups under present parameters

Philip Browne disappointed by lack of support from Wales and Scotland 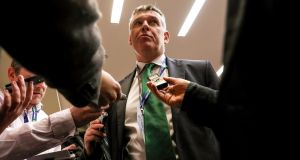 IRFU chief executive Philip Browne talks to the media after the decision to award ther 2023 Rugby World Cup to FRance was made in London. Photograph: Billy Stickland/Inpho

Six years of work having ended in defeat in their bid to host the 2023 Rugby World Cup, the IRFU chief executive Philip Browne said it was too soon to say whether Ireland would ever bid for the tournament again.

However, based on the parameters applied in the evaluation report commissioned by the board of Rugby World Cup, which culminated in South Africa winning the recommendation, and the ultimate vote for France – in which World Rugby council members were clearly swayed by the financial largess promised by Bernard Laporte and the French team – Browne effectively admitted it was a non-runner.

“Yea, not under these parameters,” admitted a patently disappointed Browne, a tad bitterly. In other words, World Rugby would need to re-evaluate what it wants from a World Cup for smaller countries such as Ireland, or indeed New Zealand and others, to ever countenance hosting a World Cup henceforth.

As to whether this experience, and the criteria which ultimately did for Ireland’s bid, would dissuade him from Ireland ever bidding again, he said: “Really, it’s much too soon to be thinking about that. What we need to do is regroup, sit down in the cold light of day in a week or two, a month or two, and just see exactly where we stand and if we could have done anything better. To be honest, I don’t think we could have done anything more.

“I have to congratulate our governments, North of Ireland and in the Republic and indeed the government here in the UK who gave us huge support. They did everything that they could and it’s been a good experience for our administration, both north and south, in working together on a project that has no agenda at all.”

What particularly rankled with the Irish delegation was that they only received eight votes, and given this almost certainly included England (three), North America (two), and one each from the USA and Canada, it therefore seems safe to presume that none of three votes from either Scotland, Wales or Italy came their way.

Speaking at a press conference, when flanked by members of the Ireland Oversight 2023 bid team, Browne said: “To be fair to Scotland, they have said consistently that they wanted to wait for the evaluation report was produced and they consistently said that they’d go with the bid that produced the greatest amount of revenue to RWC.

“In terms of Wales, the situation was that they wanted to see what the evaluation report was like, what the outcome of that was, and they felt duty bound, honour bound to support Gareth Davies, who was on the board of RWC and part of the evaluation process. I can understand where they’re coming from.”

But speaking outside to reporters, Browne could not hide his disappointment as much. “The bottom line is that we were disappointed that Scotland and Wales didn’t vote for us. They had reasons. Scotland wanted to go for the money and Wales wanted to effectively support Gareth Davies, who was part of the evaluation process.”

Davies, a former Welsh and Lions outhalf and the chairman of WRU, joined the board of World Rugby in 2014 and was elected as chairman in the same year. He is a member of the World Rugby Council, its executive committee, as well as being a director of Rugby World Cup Limited, Six Nations Rugby Limited and the British Lions (DAC) and is on the board of EPCR.

A man of many hats.

Dick Spring, the chairman of the Ireland Oversight 2023 Bid, said: “I’m used to counting votes, but we don’t know who voted for or against us at this point in time. We feel very disappointed, not getting support from some of our nearest neighbours. That’s a fact of life, but we didn’t get solidarity from our home unions.”

At his press conference, Browne endeavoured to take the defeat on the chin. “We’d like to thank all who participated in this process. I’d particularly like to thank those who supported Ireland today. For all of six years we’ve focused passionately on bringing the Rugby World Cup to Ireland in 2023, in that time we developed a world-class proposition which reflected positively on Ireland and saw us firmly, formally acknowledged as a destination well capable of hosting a superb Rugby World Cup.

“It is not to be, our race is now run, and today belongs to France.They have our warmest congratulations and every wish for a successful Rugby World Cup in 2023.”

While Browne commended World Rugby and the board of RWC for putting a good process in place, he added: “It was transparent for the first two years and everyone knew where they stood. I think if we had any difficulty, the difficulty was with the evaluation report where we felt it was lacking in certain areas in terms of exactness, detail and due diligence.”

As for reports that the IRFU had considered legal action on foot of the evaluation report and the recommendation for South Africa, Browne said: “It was never contemplated, that wouldn’t be our style.”

A delighted French delegation including former players Sebastien Chabal and Frederic Michalak, posed for photographs on the podium before Bernard Laporte, president of the French Rugby Federation, said: “I’d like to thank the Irish and South African delegations. They spent a lot of energy. It’s a lot of travel, time spent. I can imagine how disappointed they must be. They both had very good bids, not much to separate. That’s why we’re proud we won; we won against two very good bids.

“We knew we were a bit late, others were two, three years ahead of us.

“But we had to finish. Why? Because economically, it’s the great resources that will go to the amateur game. We fought for it, it’s for all of French rugby and all of the clubs. It’s €1 billion for French shop owners, hotels. It’s 17,000 jobs for France. It was a lot of responsibility, but we succeeded.”

Laporte had described the evaluation report as “nonsense”, was more conciliatory in victory. “It’s not the process that wasn’t fair, it was some aspects of the process that we felt weren’t fair. Bill Beaumount said we’ll do a debrief, but we did dispute some aspects and I’m not saying that it’s why we won. World Rugby replied to our letter, maybe it helped.”

The South African Rugby Union chief executive Jurie Roux’s had said that the last 15 days had been an opaque process after the openness and transparency of the previous two years. When this was put to him, Laporte said: “We’re not here to comment on other people’s statements, they can say what they want.”