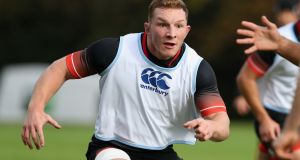 Sam Underhill during an England squad training session ahead of taking on Argentina at Twickenhan. Photograph: Getty Images

Sam Underhill has been challenged to produce a “dominant performance” for England against Argentina on Saturday, having been appointed one of Eddie Jones’s two leaders of a defence tasked with establishing itself as the best in the world.

Underhill wins only his second cap but has excelled for Bath this season, averaging 15 tackles per match, and has the chance to cement himself as England’s first-choice openside flanker with Tom Curry out until February following wrist surgery.

He was England’s top tackler on his debut during the summer tour of Argentina and the defence coach, Paul Gustard, has urged Underhill to shine on his first Twickenham Test appearance. “Sam will be a defensive leader for us this weekend. It’s important that he stamps some authority in that area though action and direction,” said Gustard.

“What I expect from Sam is a dominant performance. He is a physical player who has stopping power, can hit people backwards and take momentum away in attack. On the other side of the ball he must clear out efficiently and effectively.”

While Underhill impressed on his England debut against the Pumas, Jones’s side shipped 25 points, having also conceded 34 in the first Test seven days earlier. On Saturday England face Argentina for the last time before meeting them at the 2019 World Cup and Gustard has demanded defensive improvements on the road to Japan.

At only 21 and considering his lack of experience at Test level, it would appear a big ask for Underhill – along with the outside-centre Jonathan Joseph – to assume the added responsibility. Gustard has no such concerns, however. “He prides himself on his defensive ability, people can lead through two things – through action or through voice. He’s not a Haskell in terms of how he talks but his action is excellent,” said Gustard.

Argentina’s players have consulted psychologists to improve their mental toughness ahead of the match at Twickenham. The Pumas have endured a wretched 2017, winning just one match – at home to Georgia – and losing all six games in the recent Rugby Championship against New Zealand, Australia and South Africa. They were also beaten twice by an under-strength England team on home soil in June.

Yet Argentina have led in several of those matches, including at half-time in New Zealand and in the first Test against England. And head coach Daniel Hourcade admitted: “We lost the opportunity to win against England because we dominated the first game. The second game was more equal, but we had opportunity to win, but we were unable to take the opportunity. It’s probably mental and that’s what we have to work on, so we don’t have those ups and downs during the games. Some of the players have consulted (people) in terms of mentality, some individually with psychologists and some as a group with coaches.”