France to host Rugby World Cup as Ireland lose out 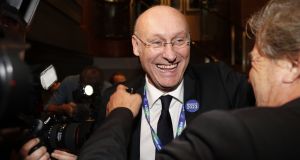 France, the overnight dark horses, has defied the recommendation of the Rugby World Cup board and the odds by winning the right to host the 2023 World Cup. The World Rugby council voted this morning, in secret ballot, to award the French their second World Cup in five cycles, having hosted the 2007 tournament in what was clearly a reward for their lobbying and bargaining in recent weeks, as well as promises of financial largesse for World Rugby.

The decision will come as a bitter blow to the South African Rugby Union and their government especially, given this was their fourth unsuccessful bid in succession and that they had won the recommendation following the Evaluation Report commissioned by the board of the RWC, and also to the IRFU, the GAA and both Irish Governments, who had invested six years in their bid.

A World Cup in Ireland, aside from being the biggest sports event this country would, or could, ever have hosted would have been worth around €2 billion to the Irish economy, according to Dublin Chamber of Commerce, which represents businesses in the Greater Dublin Region.

France had been dark horses going into the vote, which was overseen by PriceWaterhouseCooper, on the premise that they would overtake South Africa on the second count. In the event, at the end of the first count, France surprisingly topped the poll with 18 votes, followed by South Africa on 13 and Ireland on eight. After Ireland were eliminated, the French bid won out by 24 votes to South Africa’s 15.

“We had bids, like Ireland and South Africa, and it was solid,” said Bernard Laporte, president of the French Rugby Federation. “So we will do our best and I guarantee you it will be a fantastic World Cup. I really believe that.”

However, the result is embarrassing for the board of World Rugby, who had overseen a lengthy process which had resulted in South Africa wining the recommendation. In what the World Rugby Chairman Bill Beaumont said was the “most comprehensive and transparent” which the game’s global governing body had ever undertaken and which “had put the results of the evaluation process out to the public”, ultimately their recommendation was not supported by the council of World Rugby.

Irish hopes had receded since that Evaluation Report was made public on October 31st and placed the Irish bid in third place. Their delegation appeared none too optimistic yesterday, but even so a score of eight points was extremely disappointing.

On the presumption that three of those came from England, two from the North American regional association, and one each from the USA and Canadian unions, it therefore seems reasonable to presume that the Welsh and Scottish council members did not vote for a World Cup to be part hosted by their fellow UK citizens in Northern Ireland. Likewise, it is likely the Italian Federation must have voted for the French bid.

After what he described as “an extremely exciting morning,” Beaumont hailed all three bids repeatedly. Asked if the vote had made a mockery of the process, he repeated: “Not really because I think there wasn’t a great deal certainly between the France and South African bids in the Evaluation Report. It was very close and the Council members looked at that. It has been an open and transparent process.”

Why then, a secret ballot? “What can you look at is that we made a recommendation. It was not accepted by Council. It was extremely close and I think we will learn as we move forward. It’s the first time we’ve embarked on this process. We made the decision that it was going to be a Council decision. That was decided by the World Council a year ago.”

Asked if smaller countries such as Ireland or New Zealand could ever host a World Cup again, World Rugby Chief Operating Officer and the Head of World Cup, Alan Gilpin, said: “I don’t think that’s the case. The Evaluations process demonstrated that we had three outstanding bids. It happened that France and South Africa had the edge in experience but that’s not to say Ireland couldn’t host the tournament or couldn’t do so in the future.”

However much he stood by it, Beaumont did not rule out revising this process.

“Like any process you go through we will look back and have a de-brief on the process, and certainly I feel we can be confident in the process. But clearly we will look at the bids for 2023 and like any organisation look to learn from it.”

Again questioned about the decision to have a secret ballot, the World Rugby CEO Brett Gosper said: “There are fors and against. It’s a judgement call we made at the time. We also had advice from Fifa and the IOC. I venture that the result would have been any different had there not been a secret ballot. It meant that people could vote without fear. “

Beaumont repeated ad nauseum there were three outstanding bids “but it’s like a game of rugby, sometimes you lose and you’ve got to dust yourself down and get on with it.”

How each council delegate voted remains a secret and, said Beaumont, will be up to them or the Unions to divulge if they so wish.