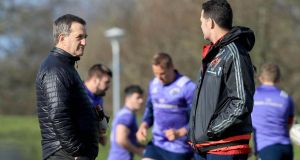 Tributes have been paid to former Munster Rugby chief executive Garrett Fitzgerald after the province announced his death on Friday following illness.

Fitzgerald served as the CEO of Munster Rugby from 1999 until his retirement in June of last year, a 20-year span that saw the province win two European Cup titles.

In a statement released late on Friday night, Munster Rugby board chairman Gerry O’Shea said: “We are deeply saddened by the passing of our colleague and friend Garrett Fitzgerald.

“With a hands-on approach, Garrett was the driving force behind Munster Rugby’s successful transition into the professional era, transforming the province into a club that is held in such high regard across the rugby landscape.

“Showing great humility, Garrett always ensured it was never about him, and it was always about the people of Munster Rugby.

“Playing a leading role in shaping the province’s story through his hard work and committed service over the past twenty years he leaves a lasting legacy that we will forever be grateful for.

“My sincere and heartfelt sympathies go out to Áine, Megan, Jamie and Michael, and Garrett’s extended family and friends.”