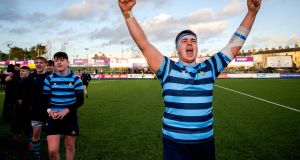 Ben Griffin was the unlikely hero as Castleknock made it to the Leinster Senior Cup semi-finals at a bitterly cold Donnybrook on Monday.

Belvedere had to deal with a number of late changes, as they lost influential flanker Eoghan Rutledge and centre Patrick O’Farrell, to add to the absence fullback Dylan O’Grady.

This opened the door for Castleknock with Ireland Schools scrumhalf Conor Duggan and centre Fionn Gibbons to the fore in their plan to spring a surprise.

The big hits came in early and often from Belvedere in an effort to discourage Castleknock’s fringe carriers.

It didn’t work, number nine Duggan taking up an unorthodox position in the lineout to make metres and tighthead Griffin twisting away from contact for a fine try in the fourth minute.

It was game on. ‘Knock’s Ian Birmingham blazed away up the middle and, when that didn’t work out, he was back in the action to force a knock on out of flanker Zander Hayden.

Belvedere got on the wrong side of the referee, giving away penalties and extra ground for chatting back, before Jonathan Ross stole a lineout.

However, they were almost caught cold again, Birmingham bursting from the front of another lineout to reach for the line, only to be called back for a crooked throw.

Castleknock could have been discouraged. They weren’t. Soon, they had position and possession again and Griffinblasted through a mass of bodies for the second try, Louis McDonagh converting for 12-0 on 15 minutes.

In the recent past Belvedere have enjoyed their share of improbable comebacks, wing Eoin MacAdaimh shooting through to give Castleknock a warning.

The pressure was building. Castleknock fullback Conor Delaney had to be textbook in his tackle on prop Jonathan Sargent and Alex Watson snatched an intercept to stem the tide.

It was difficult to understand Belvedere’s decision to take a scrum inside their own 10-metre line when awarded a penalty.

Nevertheless, from a subsequent lineout, their maul made 15 metres to set up camp. Castleknock’s Duggan and Watson bundled MacAdaimh into touch before Birmingham completed the job by countering from yet another lineout throw to the front as the first half ended.

Belvedere would have been reminded of the importance of scoring next, and they increased the intensity and tempo until Castleknock openside Ciaran McCarrick forced a penalty on the floor.

Belvedere pressure finally told however, with lock Darragh Coan driving hard and centre Peter O’Farrell finding space on the outside to score to the right of the posts, Jed Tormey’s conversion reducing the deficit to five points in the 43rd minute.

Castleknock came within inches of an immediate response, however the ball was spilled forward with the line in sight.

It was becoming a battle of wills with Belvedere on the front foot, Duggan being asked find relief with his right boot too often.

It looked ominous when Griffin was binned and the man disadvantage told, Belvedere prop Sargent crashing over, Tormey converting from the left to give his side the lead for the first time in the 59th minute.

Castleknock remained clear headed, earning a penalty which McDonagh slotted to regain the lead for his side in the 64th minute, before they held out in impressive fashion.