France forced into just one change for meeting with Italy 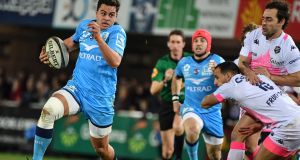 Montpellier’s Arthur Vincent will start for France in their Six Nations meeting with Italy. Photo: Pascal Guyot/AFP via Getty Images

France coach Fabien Galthie has made one injury-enforced change to his backline for the home Six Nations clash with Italy at the Stade de France on Sunday.

Arthur Vincent comes into the side at outside centre to replace New Zealand-born Virimi Vakatawa, who has not fully recovered from a triceps injury sustained early on in the stunning 24-17 home victory over England in their opener last weekend.

Vincent, 20, will make his first start after coming off the bench against England. “Vincent is a player with a perfect career: he is part of the generation of the world champion under-20, captain last year,” Galthie told reporters.

“He is present at every match with his Montpellier club. He performs very well in training with us. We expect him to be himself, to bring us his strengths, his maturity and his youth too.

“He is more of a multi-purpose centre that can play both the first and second centre positions.”

The rest of the starting team remains unchanged, with Charles Ollivon leading the team from the side of the scrum.

There is also one change among the replacements as lock Romain Taofifenua replaces Vincent, with Galthie opting for an extra forward against the physical Italians.

“This option had been considered before England and we decided to choose it this week,” Galthie said.

“We have placed two locks, including the more hybrid profile of Boris Palu, who can cover four positions – both lock positions and on either flank (in the scrum).”

Jayden Hayward has been drafted in at fullback as Italy coach Franco Smith made one change to his starting lineup. Italy are seeking to bounce back from a 42-0 loss to Wales in their competition opener last weekend in Cardiff, but Smith has resisted wholesale changes in favour of continuity.

Hayward comes off the bench to take over from Matteo Minozzi, who moves onto the wing in the place of Leonardo Sarto.

Sarto drops out of the match-day squad altogether as Mattia Bellini makes up the third member of the back three.

Flyhalf Tommaso Allan and scrumhalf Callum Braley make up the half-back pairing, and Carlo Canna and Luca Morisi the centres.

Niccolo Cannone, who debuted last weekend, retains his place alongside Zanni in the second row.

“The debut against Wales served as a lesson,” Smith told the Italian Rugby Federation website.

“Let’s look forward now to the work done this week. We are trying to improve our mechanisms and trying to show the best version of ourselves.

“It will be a tough game on Sunday that we will play with greater awareness of our capabilities.”

Italy have not won any of their last 23 Six Nations matches, with their previous success a 22-19 victory over Scotland at Murrayfield in 2015.

Their last win against France was in Rome seven years ago, while their only ever win in France came in Grenoble in 1997.