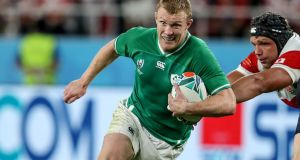 Rumours of Keith Earls’s Test-playing demise may have to be revised. His provincial team-mate, Andrew Conway, may have overtaken him in the Ireland pecking order, and Garry Ringrose’s fractured thumb may have opened the door to a place on the bench, but Earls’s performance against Wales was a reminder than an old dog doesn’t forget his old midfield tricks. He still adds real value to this team.

The debate once raged as to his best position, even if the 32-year-old has long since become more of a specialist winger. Memories will never completely fade of his try-scoring debut for Ireland at fullback against Canada at Thomond Park in November 2008. This is even truer of his only other Test start at fullback, in the home win over England in 2011 when he looked like Ireland’s version of Christian Cullen, albeit such was Ireland’s dominance he didn’t have to make a single tackle.

Ronan O’Gara, for one, always disputed the notion that Earls didn’t have the passing skills for an outside centre, where he has started 14 times for Ireland. What’s more, his scoring ratio there (five tries) is only marginally less than on the wing – 24 tries in 58 starts.

Yet his last start at centre for Ireland was in the World Cup quarter-final against Argentina in 2015. His last start at 13 for Munster was on New Year’s Day 2018 against Ulster. His last cap as a replacement was against England in the Aviva Stadium seven years ago.

All of which made his performance last week, after a three-week break, all the more impressive.

Earls replaced the hitherto excellent Robbie Henshaw in the 45th minute at outside centre. Inside a minute of his arrival, Earls received a pass from Conor Murray. Wales’s line speed meant an attempted pass would have been picked off by Nick Tompkins. Earls pulled the ball back in and, with Jordan Larmour checking and altering his angle in toward Earls, he hit the fullback with a delayed pass in the tackle.

Quickly settling into Ireland’s defensive rhythm, Earls then produced the pass of the match. After Murray had sniped off a maul, stepped and passed, Johnny Sexton quickly transferred the ball to Earls. About to be smashed by George North, Earls gathered and fired the ball right-handed from his right shoulder, like a dart, into the path of Larmour. The move eventually led to Ireland’s third try.

Near the end, Earls accelerated onto a blindside pass by John Cooney to release Conway with a rapid fire transfer. It looked like he’d been playing at outside centre all his life.

After the World Cup disappointment, a less than distinguished campaign for Munster and bothersome back and knee issues, it was one of the better postmatch feelings he’s had in a while.

“Yea, with Munster, being out of Europe is tough, getting beat by Racing away and then I didn’t play against Ospreys. So it was my first run out in a while and it was good to get one back over Wales and in the manner we did as well. We played some exciting rugby but what’s brilliant is there’s plenty more to come.”

Along the way, Earls has often switched from the wing to fill in at centre, and has tried to do some “reps” there in training, so he wasn’t playing there entirely from memory.

He particularly enjoyed the pass to Larmour.

“Under Joe, he had us wingers trying to pass quite a bit. Stephen Larkham is huge on it as well about getting quick hands and passing under pressure, and Catty’s massive on it as well so it’s something that we’ve been doing the last couple of years and months, but particularly the last few weeks under Stephen and Catty.”

The arrival of Larkham and Mike Catt at Munster and Ireland has clearly enthused Earls in his constant seeking for self-improvement. Interestingly though, Earls disputes the theory that outside centre is still the hardest position to defend.

“I think wing has got a lot harder these past couple of years. Both of them are extremely hard but I think the wing is probably the toughest, having played both. Massive decisions. One bad decision almost leads to a try out in those channels. That’s the reality of it. You need to be consistently switched on.”

Earls is never less than an engaged and endearingly honest interviewee, and he is quick to hail Conway’s all-round excellence against Wales, describing it as “the best game I’ve ever seen him play”.

“All round, anything he touched, something was happening, which is great to see but I’d like to see him looking over his back as well, as I was for the last couple of years,” he says with a knowing laugh.

Looking very relaxed, Earls is also enjoying the more easy-going environment at both Munster and Ireland, whereas before, he admits: “There were times when we were scared to laugh. If you were laughing you weren’t switched on or you weren’t concentrating or you weren’t being professional.”

“Last week after we did the Captain’s Run we didn’t meet again until we were getting on the bus going to the game. Usually you’d have a couple of meetings beforehand and you might have a meeting at 10 in the morning and the anxiety starts coming in from there whereas it’s completely chilled.”

“We are trying to enjoy ourselves but once you walk out in the four lines you have to be switched on. It’s being able to switch on for the hour or so rather than wasting energy all morning or two days or a day out, wasting energy on thinking about plays or stuff like that. Yeah, it’s definitely a lot more relaxed in Munster and Ireland as well.”

“We’re barely in the classroom as well,” he added. “We see our classroom as being on the field. Faz brings down a TV to the side of the field at the HPC [high performance centre] and we’ll look at a play and then we’ll go out and rep it. It’s just coaches are different.”

In other ways too, all has changed utterly since his early days in the squad, when so much of Ireland’s energy for games against England was emotionally charged.

“Definitely there was a generational thing. I think that’s why it took me so long to find myself as well because maybe I was trying to be like Paulie or Rog or some of them old fellas who try and play on emotion every week, which is impossible to do,” he says with a smile.

“It’s a breath of fresh air coming in now. Like, completely chilled out and being able to enjoy a sport, that’s so important. It’s great.”

Trying to keep a perspective is important for Earls, who used to be consumed by nerves and self-doubt. In the build-up to the World Cup quarter-final against the All Blacks, he said the worst thing that could happen was that Ireland would lose and he’d get to go home and see his wife and kids.

Looking back, the constant gym work on his ailing knees had meant the World Cup campaign “was just full-on, full-on rugby”.

“Then, unfortunately, we were knocked out and I got away and spent a bit of time with the kids in Center Parcs with Peter O’Mahony and his kids, and it was just a normal life getting away from rugby. But it’s amazing, a week later you’re like: ‘Jeeze, I just want to get back on the field now’.”

“We had time off at Christmas and it was probably my first time, in my career I’d say, I found myself drinking and eating over Christmas. It’s amazing, when you’re playing you’re like: ‘Jeeze, I wish I could be out with the family or out with the lads having drinks.’ And I was doing that this year and I was like: ‘I definitely prefer playing.’ I think the couple of days is great but then after a week you want to get back into it.”

The “fire in the belly”, as he puts it, still burns.