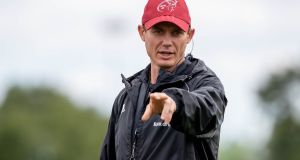 He only arrived last summer but Stephen Larkham must feel as if he has just completed his third pre-season campaign with Munster as they head into another block of games after a break.

The Australian World Cup-winner was without the Irish players for the first chunk of games when he arrived and then when they returned from the World Cup there was another bedding-in period.

Now, after a four-week break since they exited the Heineken Champions Cup, Larkham is adjusting to a block of three games in the Six Nations when they will again be without most of their international players.

“I am not used to the long seasons. Super Rugby would be over by now, 15 games in,” admitted Larkham.

“What we saw when we first got here is that we did not have those international players when the World Cup was on and the guys who were here played exceptionally well and improved week to week.

“They were challenging the international players when they came back into the squad and that is where we are at right now.

“If I look at the squad there is probably 10 to 15 guys unavailable for our team this weekend through injury. It happens with long seasons.”

The Pro14 title is all Munster have to aim for now this season but they have, of course, been busy planning for next season with South African World Cup winners Damian de Allende and RG Snyman, along with Irish-qualified Matt Gallagher joining from Saracens.

Centre De Allende and full-back/winger Gallagher will fall directly under Larkham’s tutelage next season and he’s looking forward to working with them.

“De Allende is an exciting player, isn’t he? He has got very good skills, he is a big man. We played against him at Super Rugby level and at Test level. He is one of the best attacking players in the world.

“He is not a one-trick pony where if you shut down his running game you are going to shut him down, he has got all the skill elements.

“He is somewhat of a kicker, he certainly has a good pass, he is powerful through contact, but he also has good evasion, so I think he is going to bring a lot of excitement to the game here.

“Matt Gallagher has performed exceptionally well for the games that he has played this year for Saracens. He is somewhat local, his grandmother lives or lived here [in Ireland] and we saw enough in the games that we saw this year of him playing for Saracens that we think that he is going to add something a little bit different to our team for next year.”

Head coach Johann van Graan intends spreading his squad across this three-game block during the Six Nations against the Kings, Zebre and Scarlets.

Chris Farrell and Jack O’Donoghue, among 13 players released from the Irish squad for action this weekend in the Pro 14, both start on Friday evening as Munster bid to bounce back from their festive derby losses away to Ulster and at home to Leinster when they take on the Southern Kings in Cork.

Van Graan has handed a debut to backrower John Hodnett, one of the heroes of the Irish under-20 Grand Slam last year, and the Clonakility RFC product comes straight into the side.

There are two other academy players are in the replacements with South African native Keynan Knox in line for his eighth appearance, while Ben Healy could play his third game as understudy to JJ Hanrahan at outhalf.

Jerry Sexton, younger brother of Irish captain Johnny, is in the secondrow for a Kings side who have lost nine of their 10 games in the competition this season.