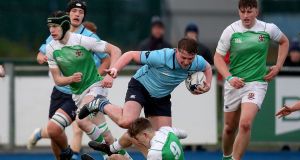 St Michael’s overpowered Gonzaga to reach the last four of the Leinster Senior Cup on Tuesday - keeping their quest for back-to-back titles very much on track.

Gonzaga took the scalp of Blackrock in the first round and they were not inclined to stop there in a repeat of last year’s final at Energia Park.

They started strongly and dominated possession, but St Michael’s managed the first meaningful attack after outhalf Harry Colbert was forced to kick the ball away. It was collected by Chris Cosgrave who was rattled by a high tackle from Simon Wilson which drew a penalty for St Michael’s.

The strength of the wind was significant and at the backs of the reigning champions for the first half. Niall Carroll chose to use it for a gain of 70 metres, turning the pressure on Gonzaga’s lineout. Hooker George Kenny was up to the job however and that pressure was eased.

For all of Gonzaga’s own early possession, they struggled to break the gain line. But that wasn’t a problem for St Michael’s, once their opportunities did arise.

After Jack Guinnane stole a ball on the floor, it was moved with menace through the phases for prop James Power to make the line break and score the first try of this quarter-final. Cosgrave converted for 7-0 in the 12th minute.

It was suddenly looking ominous, with Simon O’Kelly stepping out of tackles and loose forwards Will Hickey and Conor Booth punching holes. O’Kelly couldn’t hold on to Booth’s pass with no one home. Another let-off.

But it wasn’t long before prop Jack Boyle thundered through the wounded Gonzaga defence and Power pounced for his second try, Cosgrave’s conversion adding to the lead in the 20th minute.

Gonzaga did manage to register some points on the board - when a well-worked lineout allowed George Kenny to make a break. An over-eager St Michael’s defence rushed up offside and Colbert slotted three points from a 30-metre penalty for 14-3 at the break.

Now, Gonzaga had the wind, rain and snow behind them in what suddenly looked like a surmountable lead.

Not so fast - a piece of brilliance from Cosgrave down the right wing created a third try - this time for Lee Barron.

Gonzaga lost flanker Arthur Henry to a yellow card, allowing St Michael’s to go for the jugular. Barron added his second try after a powerful maul, Cosgrave again kicked the extras. And he added a penalty in the 59th minute, judging the wind to perfection.

There was time for one more penalty from Cosgrave as St Michael’s flexed their muscles and marched into the semi-finals.

Replacements: J Nicholson for McErlean (45 mins); M Barron for Ryan and J Woods for Gunne (both 55 mins); L Russell for McWade (62 mins); Z Baird for L Barron and J Egan for Boyle (both 66 mins); D Carroll for Booth and D Rogan for Power (both 67 mins).