Munster lord it over Southern Kings in 10-try rout 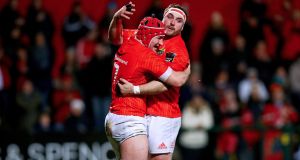 Munster ran in 10 tries as debutant John Hodnett produced a man-of-the-match display in Musgrave Park against a Kings side well out of their depth.

Former Springbok Arno Botha crossed for a hat-trick with Shane Daly getting a brace on a night when seven players crossed for Johann van Graan’s men.

And while they won’t get carried away given the dreadful quality of the opposition, this was the perfect way for Munster to launch this block of Pro 14 games now that they are out of the Champions Cup.

Munster were never threatened and had the game wrapped up by the interval after building up a 28-3 with the Kings, as expected, having their defence stretched from the outset.

And with Munster on top in the scrum and the South Africans lacking penetration and accuracy in the maul when they had good possession, the outcome was obvious from early on.

Munster had the bonus point in the bag by the interval when they turned around leading by 28-3 after an impressive opening against a Kings side who missed 17 tackles alone in the opening half.

Twelve of the starting 15 were produced by Munster and the latest to come off the conveyor belt, Clonakilty RFC product Hodnett, stepped up to this level with ease as he crowned his debut with a superb display.

A key figure in the success of the Irish U-20 side last year, the openside flanker was full of energy and zest from the outset and he set up the opening try with a surging run after seven minutes.

The 21-year old was stopped short but Kings fullback Andell Loubster did not release and was binned. Munster opted for the scrum and Botha broke from the base and with only outhalf Demetri Catrakilis in front of him, made it to the line.

Former Harlequins and Montpellier outhalf Catrakilis pulled back a penalty but Kings were sloppy all over the pitch and Munster, while not without their own unforced handling errors, pulled away.

A switch from centre Dan Goggin exposed the Kings’ defence for Mike Haley to send Calvin Nash over in the right corner after 23 minutes, with JJ Hanrahan landing his second conversion to make it 14-3.

Hanrahan was instrumental in setting up the next try, a saunter through by former Springbok Botha for his second touchdown of the night, after excellent handling out wide by Chris Farrell, who was superb throughout, and Niall Scannell.

The bonus point came from another player keen to impress Andy Farrell with Jack O’Donoghue getting the bounce when he chased a neat chip from Hanrahan and the Waterford man encountered little blockage from fullback Loubster as he scored. Hanrahan landed his fourth conversion to make it 28-3 and all that remained to be decided was the margin of victory.

Hodnett had the crowd on their feet when he scored with a surging run after being set up by Neil Cronin and Haley after 49 minutes.

The South Africans unravelled after that and some woeful mistakes in defence were clinically punished with a poor dropout from Catrakilis bring punished when scrumhalf Cronin danced his way over.

Hanarahan converted the opening six tries and then Ben Healy came on and added the extras when Shane Daly touched down after a wild pass back over his line by replacement Josh Allderman.

Kings finished with 14 men when flanker Lusanda Badiyana was binned and Munster punished them as Dan Goggin and Daly scored either side of Botha completing his hat-trick.

Replacements: N McCarthy for N Cronin, B Healy for Hanrahan, R Scannell for Nash (all 56 mins); K O’Byrne for N Scanell, J Loughman for J Cronin), K Knox for Ryan (all 60); G Coombes for Wycherley, C Cloete for Hodnett (both 63).