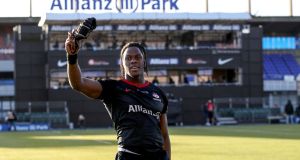 Allianz will end its sponsorship of Saracens and the club’s stadium at the end of the season. Photograph: Dan Sheridan/Inpho

Allianz will finish its sponsorship of Saracens and the club’s stadium at the end of the season, the company has announced.

The German insurance group has sponsored Saracens since 2012 and, as well as holding naming rights to the Hendon-based stadium, was set to continue in a deal through until 2021.

However, with Mark McCall’s side now preparing for life in the Championship after accepting relegation from the Gallagher Premiership for repeated salary cap breaches, the club’s long-serving commercial partner has decided to cut their association short.

“Allianz has taken the difficult decision to end its sponsorship of Saracens Rugby Club and stadium at the end of this season,” a company statement read.

“Allianz intends to continue to be involved in the great work that the Saracens Sports Foundation does in their local community and wishes Saracens well in the future.”

European champions Saracens are reported to have been paid £2million (€2.4 million) a year as part of the agreement with Allianz, who sponsor the kit as well as hold naming rights on the stadium.

Last month the club were handed another points deduction, with their relegation from the top-tier elite also confirmed.

Earlier this month, Saracens were fined €50,000 – half of which is suspended – for fielding an ineligible player in their Heineken Champions Cup win over Racing 92.

The Gallagher Premiership side, though, were not deducted any points over the incident, which would have resulted in them exiting the competition.