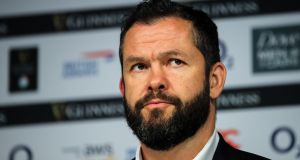 Time was when Joe Schmidt’s Monday morning reviews assumed almost legendary status. Whether or not this became a tad overstated, or whether or not some players anticipated them with trepidation or even fear, there was no doubt they contributed to a golden age for Leinster and Irish rugby.

But no two coaches are the same and no successor can be a replica of the one who went before. So it is that Andy Farrell has modified the Ireland squad’s Monday reviews, by generating more individual player input through instigating smaller meetings between coaches and players.

The Monday review is akin to “therapy for players” according to Farrell and after spending most of Sunday away from camp and with family and/or friends before there might be a leadership group to get a feel for what the players are thinking through.

“On Monday morning we’d certainly make sure we’d get the ball rolling by communication with as many people as we can. We split into real small groups, not units. It could be position specific. Units and each coach would look after that and what that does is it gets people talking, because what we all must realise is that a player is always going to look at the game, no matter how much of a team player, and what’s happened for him.”

“All we’re trying to do on that Monday is make sure that he gets the reality of why things have happened, and sometimes he’s so emotionally high that you need to bring him back down, and sometimes he’s so emotionally low that he’s got all sorts of excuses but when you start to filter back the reasons why, along with the data and everything you’ve watched, all of a sudden you get people coming out of themselves.

“Then you get to be able to move forward, and that’s the key. So on Monday you’re not just trying to review, you’re trying to make people feel better for a good start to the week and also to influence the plan for how you’re trying to push forward for the rest of the week.”

Farrell was speaking on the second day of the IRFU #Analytica 2020 Webinar, in aid of Pieta House. He took part in the concluding conversation, with a focus on the use of analysis and data in coaching, along with Paul O’Connell and the Dundalk football manager Vinny Perth.

“Players want information. They want feedback, they want to know the plan going forward together, they want to know that they’re all on the same page and that gives them security. How you go about that is our job as coaches, to make sure we get that right,” said Farrell.

Whereas back in his playing days the Monday review could consist of the entire squad rewatching the complete match together, modern players benefit from changes in both data and facilities, albeit no two players are the same.

“One player might learn better through a walk through, or with a little bit of visual and then a walk through, whatever. But there could be a player, and certainly there is within our group, that loves sitting down in a meeting room and taking notes and a lot of players do need information. It makes them feel secure. For some players, too much information panics them a lot. Everyone is different, and one size certainly doesn’t fit all. It’s about knowing your teams first.”

Before it was fashionable, O’Connell took notebooks into meetings, and he admitted he could be something of a nerd when it came to lineout analysis, both as a player and assistant coach with Stade Francais.

“My main problem would be giving too much information,” he admitted, “and thinking that what you’re into is what everyone else is into.”

The former Ireland captain also discovered that when players knew a meeting was restricted in time “you’d get full engagement and they’ll listen”.

“Little and often, not long meetings,” was key, said O’Connell, who cited a Lions squad meeting in 2009 when he, as the lineout caller, and forwards coach Graham Rowntree had prepared “11 different things we wanted to present”.

However, Rowntree presented only three of the clips before then explaining to O’Connell: “Gats [Warren Gatland] said to me ‘pick three of them, that’s all you’re allowed’ and then walked off.”

“For me, that was when the penny started dropping,” said O’Connell.

A video analyst, both Farrell and O’Connell added, should also do more than present data, but contribute beyond that by building relationships with players and coaches.

“How you add to that group is absolutely crucial because you play a vital role,” said Farrell, while O’Connell revealed that his tighthead scrummaging was improved by Ireland’s video analysts, Mervyn Murphy and Vinny Hammond (who organised the webinar), along with scrum coach Greg Feek, inventively attaching a camera to a telescopic pole. “I’m pretty sure every team has it now, I’m pretty sure every team didn’t have it then.”

In conclusion, all three were asked to name their favourite sports books. Perth chose The Score Takes Care Of Itself by the esteemed NFL coach Bill Walsh. O’Connell opted for The Little Book of Talent by Daniel Coyle which, he said, was mainly recommended reading for players. Farrell referenced Relentless: From Good To Great To Unstoppable, by Michael Jordan’s trainer, Tim Glover, before plumping for Sacred Hoops by Phil Jackson, Jordan’s coach at the Chicago Bulls.

The two webinars raised more than €12,000 for Pieta House.