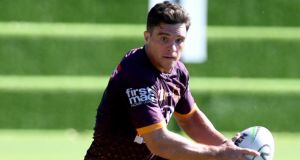 Brodie Croft Croft was put in a holding room where he waited 15 minutes before taking a third test, which he passed. Photograph: Bradley Kanaris/Getty

The Brisbane Broncos were given a timely reminder of what the rugby league landscape looks like in the Covid-19 era when Brodie Croft failed a temperature check before the NRL’s first game back since the shutdown.

The young halfback twice recorded temperatures above the permitted limit of 37.2C when he arrived at Suncorp Stadium, threatening to throw the Broncos’ preparations for the round three game against Parramatta into chaos.

Croft was put in a holding room where he waited 15 minutes before taking a third test, which he passed. The NRL’s strict new biosecurity rules require all players to have their temperature taken upon entry; if they fail the test, they will not be allowed to play.

“I’m feeling good now, I’m keen to get out there,” Croft told Fox Sports having made it into the stadium. “The excitement got to me a bit there when I was at the front gates.”

Croft went on to score a superb individual try midway through the first half, but the Broncos were overwhelmed by the Eels in the first of this week’s round three fixtures, falling to a 34-6 defeat – their first loss of the season.

Before kick-off in Brisbane, the NRL announced a new broadcast deal had been reached just hours before the resumption of the season following a 10-week hiatus due to the coronavirus shutdown.

Financial details of the deal between the ARL Commission, Foxtel and the Nine Network were not disclosed but the broadcasters will show the NRL until the end of the 2022 season, with Fox’s partnership extended for five more years until the end of 2027.

“I am delighted to have worked with our long-standing partners Foxtel and Nine to reshape and resume the 2020 NRL Telstra Premiership,” ARLC chairman Peter V’landys said.

“It is significant that on one of the most important days in our game’s history, we have finalised the deals to ensure its future.”

The grand final on October 25th will be shown exclusively on Nine, while the free-to-air network also retains exclusive rights to the State of Origin series to be held in November.