Province can’t pay off oustanding €6.9m loan from IRFU with no supporters at the match 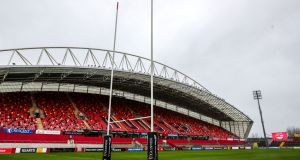 Munster have been forced to pause the renewals of their season tickets for 2020-21. Photograph: Ryan Byrne/Inpho

Munster face the worst of the financial crisis caused by provinces being forced to cancel season tickets for 2020/21.

An outstanding IRFU loan of €6.9 million, to cover Thomond Park’s redevelopment in 2008, cannot be paid off without supporters attending games. How this impacts Johann van Graan’s playing squad has yet to be revealed.

People crammed into stands and terraces, as Leinster stated, will be denied by social distancing rules becoming “a part of sporting and other spectator events for some time to come.”

This brings into sharp focus Munster struggles to pay off the Thomond Park debt.

The province was given a new schedule of loan repayments - reduced from €500,000 annually to €100,000 - in 2018. As part of the deal Lansdowne Road accountants insisted on receiving 50 per cent of any additional multi-year ticket sales, 50 per cent of any multi-year corporate box sales and 50 per cent of net Thomond Park naming rights income on an annual basis.

Munster are in the process of engaging with five-year and 10-year ticket holders who have been at capacity since the new scheme was introduced in 2018. With no plans to access the stadium even when games initially return to Limerick, the price for premium 10-year tickets of €4,950 down to five-year tickets for Category A seats at €1,885 no longer appears to be a workable arrangement.

Professional sport - like many global industries - is growing increasingly desperate to start selling its product again to tens of thousands of willing customers. In the meantime the lack of cash flow is crippling Irish rugby.

Smooth transition into the new normal seemingly requires sports administrators to bookend every answer with “if government guidance permits such action.”

On May 2nd Cillian de Gascun, the virologist on the National Public Health Emergency Team, stated that gatherings of people in large numbers can only be recommended when a “seroprevalence” study is completed in June. This requires blood testing of a sample of society to calculate the percentage of the population that has been infected by coronavirus.

“If we do that study and find out 30 per cent of the population has actually been infected but just very mildly infected that actually gives you a bit of confidence,” Dr de Gascun explained, “as only 70 per cent are susceptible, so we can release things more quickly, and still focus on vulnerable groups.

“Mass gatherings are really difficult to see coming on stream any time soon,” he added.

There will be no supporters at the Aviva stadium when rugby returns for a string of fixtures starting with Leinster versus Munster on August 22nd before running into a unique Six Nations in November. World Rugby’s suggested capacity of essential workers for otherwise empty venues has increased to 174.

Come August a precedent will have been set for Irish rugby teams to travel abroad for matches without having to quarantine for 14 days. On July 1st Spain is set to open its borders to tourism with safe corridors to beaches and other social areas. Similar plans are being hatched for direct travel from chartered airplanes to stadiums.

But the notion of crowds in stadiums this summer has been branded “absurd and dangerous” by the president of the Australian Medical Association Tony Bartone, after Rugby League chiefs suggested as much ahead of their June 11th return to action.

“The NRL should be satisfied that it has its competition back in action, but it is unfair and unwise to put the health of the game’s fans at risk,” said Bartone.

“Now is not the time for sporting codes to be considering having crowds at games. They must wait until the medical experts advise that it is absolutely safe to do so - and that will not be as early as July.”

The NRL are still aiming to put 30,000 social distancing spectators into the 100,000 capacity Melbourne Cricket Ground for their grand final on October 24th - that’s also the date the ‘autumn Six Nations’ would kick off.

Speaking to Aviva stadium director Martin Murphy, social distancing measures to reduce capacity by half the usual 50,000 at internationals in Dublin will not be a sustainable financial model.

“It comes back to what we learn from testing [IN JUNE],” said De Gascun. “Every time we take a step we will be waiting to see what the impact of that will be. If we go to 500 people gatherings and the virus kicks off again then we step back.

“We will look to see what other people and countries are doing and we will try to learn from that.”

World Rugby’s executive committee - which currently has no Irish representative as no-one was nominated at the recent elections - are meeting this week to consider the implementation of law changes to make players and their families safe when full contact resumes.

“There will be no sweeping necessary amendments,” a WR spokesman stated rather cryptically, despite a leaked medical document suggesting no set scrums, mauls, upright tackles, huddles or spitting will help players avoid contracting the virus.

The amateur game is almost certainly going to need some of the “potential law amendments” earmarked in the document to provide a pathway for the All-Ireland League and schools rugby to return next season. If this is even possible.

The executive committee will also discuss the logistics around supporters eventually returning to stadiums.

“Our decision will be dependent on many different government guidelines.”