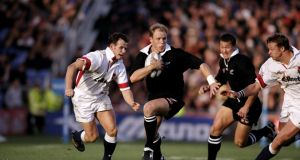 Many of the attacking skills of great players such as New Zealand’s Jeff Wilson were learned through unsupervised play on the local green or on the school playground. Photograph: David Rogers/Allsport

I have consciously stayed away from the dregs of social media during the pandemic. The world is depressing me at every glance.

Reading tweets from the deranged mind that sits in the White House, encouraging injecting bleach and getting sunlight inside your body, has made me decide that I would rather have actor Alec Baldwin’s hands on the nuclear launch codes than the mentally unsuitable man he so wonderfully impersonates.

One of the most disconcerting images of the pandemic was that of French schoolchildren at their lunch break.

Each child was being forced to sit within a two-metre marked square on the asphalt. The children’s body language, isolated and alone, was as demoralising as the president’s tweets.

While this school’s policy is an extreme example, forced on the teachers by the pandemic, many of our schools’ internal policies regarding games in the playgrounds are now dominated by lemon-sucking begrudgers, whose pursed lips form “cats bums” of disapproval at any act of physical activity.

The fun police have in many cases banned ball games from school yards, believing that a skinning a knee is bordering on an offence against humanity.

I am thankful that the great teachers I had never discouraged us from physical activity. They daily wiped antiseptic on our grazed cuts and unlike the US president, did not encourage us to drink it.

Covid-19 and over-cautious “Oberstleutnant” guardians have taken away most creative learning environments that encouraged our youth to master the physical micro skills that are learned through unsupervised play on the local green or on the school playground.

Physical dexterity, with hands, feet and body is a human gift that is rapidly disappearing from our extended sporting world. Fast, agile feet that can sidestep while striding at top pace was something that all our greatest attacking players possessed.

Phil Bennett, Simon Geoghegan, Barry John, Mark Ella, Tony Ward, David Campese, Rory Underwood, John Kirwan, Brian O’Driscoll, Jeff Wilson and Sonny-Bill Williams, to name but a few, all had many great attacking qualities but their ability to use their feet to get into the space on the shoulder of their defender was the foundation of their success.

Players today, such as Faf De Klerk, Cheslin Kolbe, Aaron Smith, George Ford and “Super duper” Michael Hooper remind us that players with highly dexterous micro skills can light up the international stage. All of these players possess those tiny, rapid, adjustments of the hands, body and feet that are crucial to implementing skills at high pace.

From Kolbe’s staggeringly rapid change of direction, to Hooper’s cat-like ability to place his body in the exact point of time and space to poach at the tackle, combined with lion-hearted courage, they are all match winners.

The great challenge for this generation of coaches is how they reverse the fast-disappearing essential micro skills in rugby. We only know what we know, so when the technical knowledge drains from our coaching community it will be lost to future generations.

Unions must work harder to provide deeper technical knowledge on footwork, passing, catching, kicking and offloading, while coaches must take responsibility for their own learning and search for technical insights into what to teach and not how to teach.

For example, the skills required for a player to catch a long, flat, hard pass, then immediately look up and make eye contact with the defender, because this both commits and isolates the defender. Then to use footwork to create space on the shoulder of that defender, before delivering a soft, short, pop, pass into that space, for a team-mate to run on to it, at full pace, must now all be taught.

For generations, these and many other micro skills did not need to be coached. They were learnt through unsupervised play on the local green or on the school playground.

Today’s coaches must teach and drill these skills, then provide training games that encourage their athletes to perform these skills under varying amounts of pressure, while also providing a safety net to protect the players’ confidence when they fail, because failure in the early stages of learning is a constant companion.

This pandemic has created an opportunity for players to work on these micro skills in their own time away from organised practice.Repetition is the mother of all learning and micro skills must be learnt, repeated and reinforced for them to become instinctive.

In isolation, players can learn how to “jump rope” and skip, using a boxer’s foot patterns in skipping techniques to learn foot agility.

Players can use a short hallway to slowly repeat and learn the foot patterns required to sidestep off both their front and back foot. Torpedo punts can be rediscovered, by working on the correct, 40-degree ball drop and foot position to torpedo kick a small soft rugby ball.

While there is an opportunity to practice, the correct technique for the micro skill has to be provided. That is the coaches’ job.

The leaders of the game in the future will get ahead of the learning curve and start now. While rugby remains the ultimate team sport, the fact remains the highest individual skills within any team set the limitations for that team’s performance.

As Michael Jordan said: “There is no ‘I’ in team, but there is in win.”