The Offload: Is Freddie’s nightmare really the ‘ultimate low’?

If this is Burns giving his best “always” Bath are in deep trouble. 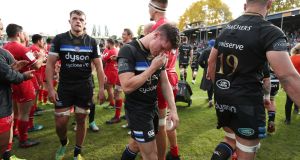 There’s already a Zapruder feel to the Freddie Burns footage.

We are finger tappingly quick to slate people in 2018 but the forgiveness bus ain’t far behind.

Current and former players arrived to dig Bath’s fullback from beneath a twitter avalanche after this England international, whose little brother Billy has declared for Ireland via Ulster, followed up a routine yet crucial penalty miss with an air-kiss-badge-touch - which is the funniest part of this mess but equally the most damning - and sloppy one-handed slow milking of a touch down that was supposed to kill off Toulouse at The Rec on Saturday. That’s until the ball was expertly stripped by Maxine Medard’s wrist slap.

Here’s Freddie: “Love this sport for the highs and the lows. Today was an ultimate low and a mistake I’ll learn from. I’ll continue to give my best as I always do.”

Is the “ultimate low” in sport losing because you lacked focus or losing after you’ve left everything out on the field? Burns appears to believe the former over the latter.

Moving on is vital for Burns but Todd Blackadder clearly disagreed (hooking the visibly distraught player to deny instant redemption). If showboating in the 76th minute of a massive European game, while trailing 20-22, and so directly contributing to a defeat that puts the jobs of a coaching staff that includes Girvan Dempsey in peril, is Burns giving his best “always” Bath are in deep trouble.

This wasn’t the “ultimate low,” it was a 28-year-old international irresponsibly inviting sporting disaster. Bath’s subsequent ban on players celebrating before grounding the ball adds an extra layer of farce.

85 MILLION - “Oh Freddie” said the commentator as the game was broadcast to 85 million American homes on NBC.

“‘You miss, you miss’ my bollix. F**king hell. As Claw reminded me in New York ‘You f**king langer you missed all those kicks against Northampton. I’ve no medal! I haven’t forgiven you either you c**t.’”

At the end of Gavin Mair’s piece in The Daily Telegraph entitled “How Ulster rose again after rape trial left the club’s reputation in tatters,” Operations Director Bryn Cunningham is asked about the possible return of Paddy Jackson or Stuart Olding to Belfast.

“I think the one thing about that is that everybody appreciates that time can be a healer and, ultimately, we are dealing with a situation where two guys and the other two members of the group were acquitted of all charges, so I suppose there is nothing to say that down the line at some point then maybe those guys come back and play in the white of Ulster. It is probably just too early and too raw for many people to probably to make any firm judgement on that.”

The Telegraph also revealed that Gareth Robinson (physio) and Jonny Davies (strength and conditioning) were “let go in May after IRFU review.”

Ireland captain Rory Best spoke on BT Sport last week about his decision to attend the trial of Jackson and Olding the Wednesday before the Six Nations game in Paris.

“I feel that it’s a lesson I hope my kids take from it,” said Best.

“If you have friends that are in trouble and they need a bit of help and support, and if they are promising you that they have done nothing wrong, even though people may not think it’s the right thing to do, I think it is.”

“‘What, that was four months ago?’ I tried to contest it on those grounds so we kept quite for a few weeks,” Grobler told The Mail on Sunday.

The message to young, aspiring professionals from Grobler’s latest interview can be interpreted as: load up on steroids when you are injured, you almost certainly won’t get caught and if you do there remains financial outlets, post the two-year ban, in places like Racing 92, Munster and currently Gloucester - who visit Limerick on Saturday.

Speaking candidly about most things, except how he got the drostanolone, Grobler even reveals an addiction to the pain killer OxyCotin.

‘You are a shit rugby player. You’re not big enough’... Eventually my back was against the wall. I approached quite a lot of people and said, ‘What should I do? How can I get better?’ I took something and I tested positive.”

If World Rugby do not feel these Grobler quotes demand further investigation, how can the sport expect to stand over any anti-doping message?