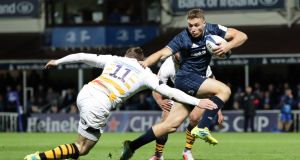 Leinster’s Jordan Larmour scores their sixth try despite an attempted tackle from Elliot Daly of Wasps during the Heineken Champions Cup match at the RDS. Photograph: Billy Stickland/Inpho

After scaling such dizzying heights on opening night, not surprisingly Leo Cullen afterwards did his damndest to keep some kind of perspective on what was a record Leinster win over Premiership opposition in the history of the competition, the 52-3 win eclipsing the 60-13 scoreline over Northampton at the Aviva in 2016.

The scale of the win will add to the feeling among an 18,3000 capacity crowd and many more watching on TV that Leinster can emulate last season’s success, but Cullen warned: “We just need to be careful that we’re not getting too far ahead of ourselves. We’ve played one game and no-one else played yet in Europe.

“There’s a lot of very good teams in Europe at the moment. I think it’s been tough for Wasps because they’ve a lot of injuries and lost a player to suspension during the week, so it’s been a disruptive week for them. And sometimes in Europe you only need to be a little bit off and you come unstuck, and sometimes then the score can get out of control.

“It can be a little bit misleading at times. It was very close going in to half-time. It could easily have been 7-3 and 15 on 15 at the start of the second half. As I said, that was a big moment in the game, but the most pleasing bit was that we kept pushing and pushing and pushing until the end. But until half-time there were lots of parts of our game that were probably not quite to the standard that we would like. So there’s definitely scope for us to get better.”

Still and all, he couldn’t help but be pleased by his team’s 80-minute performance. “I suppose the intent to play until the end was the most pleasing bit. We talked a lot in the past about every point counting but yeah it was good to keep playing until the very end.

“It wasn’t perfect in the first half. I thought we were a little bit scrappy and misfired around the set-piece a few times as well. It was a big moment obviously just on half-time when they lose a player to the bin and we go on to score just before half-time and then score two minutes into the second half, so the score goes from 7-3 to 21-3.

“But we managed to hold onto the ball a bit better than we did last week. Against Munster we coughed up a lot of ball and had very little possession, so it was nice to be on the other side of the possession stats today.”

Cullen confirmed that Dan Leavy’s calf had tightened in the warm-up, as it had earlier in the week, so leading to Rhys Ruddock’s late promotion. Cian Healy went off at half-time with what Cullen said was “a bang to the knee but I don’t think it’s very major” while Rob Kearney was Leinster’s only other minor injury concern with an unspecified “tightness”.

Helpfully, Leinster have a nine-day turnaround before facing Toulouse away.

“There’s so many variables over the course of the tournament, so we certainly don’t want to be seen as peaking in round one,” said Cullen. “The challenge of playing Toulouse away is certainly very different from playing Wasps here in the RDS on the back of some of the disruptions they have had this week. For us we just try and focus on getting better and take on the four-time champions Toulouse in their home ground.”

For Wasps, this was a record defeat in this competition, eclipsing the 31-0 defeat to Stade Francais in the 2001-02 season, and Dai Young admitted he felt the margin was down to a combination of Leinster’s brilliance and his own team’s poor display, especially in the manner they caved in over the last quarter.

“I think it’s going to be a difficult place for anybody to come and win. There’s probably not much money on any team coming here and winning.

“I was disappointed how we fell away, but I can understand why we did. And for big parts I was proud of some of the defensive work-rate and attributes – but you can’t keep doing it.

“They were pretty much the Irish team . . . and they haven’t done too bad of late. They’re too good a team to think you can defend against them for long periods. The dam will burst.

“The sin-bin cost us dearly, they scored just before and after half-time and the last 20, 25 minutes was just damage limitation. I don’t see many teams coming here and getting a result.”

Man of the match James Lowe was in typically ebullient form afterwards after following up his brace against Munster last week with another here, and in the process took his try tally to six in five games this season and 16 in 18 overall for Leinster.

With four in four Champions Cup, he is making it very difficult for Cullen to make him the most expendable of Leinster’s three non-EU players.

“I guess we couldn’t have written the script any better. We absorbed a lot of pressure in the first half and in the second half our first play we managed to exploit them. They’re a good side and they’re missing a fair few big-time players, and at home we managed to come away with five points and we’re very happy, and looking forward to going over to France next week.”

Asked if he’s enjoying his rugby, Lowe downplayed his own contribution. “I don’t do too much. I was telling Jonathan [Sexton] in the changing room that I kind of stand out there and hope they pass me the ball. It’s nothing special, it’s nothing out the gate. I just pass it when I pass it, and try to run. Sorry, I’m a bit tired. It’s been a bloody big day.”

Lowe also revealed his parents are coming over for the November Test window, and the only blight on his charmed time in his adopted new life in Dublin was that his car was broken into on Thursday.

“My car got broken into last night. Man, I couldn’t believe it. They didn’t take anything. They broke the smallest window and then just ran off. If you find them, tell me,” he joked. “The police rang me yesterday, and we had a funny chat. I was like ‘Man, if you do find them give me 10 minutes with them.’ He just giggled.

“But yeah, apart from that, me and the girlfriend have really settled in. We’re enjoying our time here and she’s enjoying her job, and that’s half of it,” said Lowe, whose girlfriend studied law and is working in the Bank of Ireland. “You get your life sorted off the field and on the field becomes easy.”