With Scarlets and Racing 92 also in Pool Four, win tonight is crucial for province 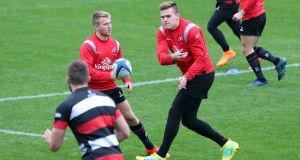 Akin to Rassie Erasmus in his first season with Munster, when Dan McFarland initially looked across the contenders in Pool Four with a view to identifying the group’s possible soft touch he probably came to the pretty swift conclusion that the tag applied to Ulster.

Then again, on foot of taking over from Matt O’Connor just one game into the new season, Geordan Murphy may have come to a similar deduction. In any event, with last seasons’ beaten semi-finalists the Scarlets and losing finalists Racing 92 in this pool, this looks like a must-win game for Ulster and Leicester’s most winnable away game.

This is simply a huge game, particularly in Ulster’s season.

These two ruled the roost between them for three years around the turn of the millennium but they’ve long since stopped being real contenders.

But it’s now been seven years since Ulster were beaten by Leinster in the final, and five years since Jared Payne’s infamous red card denied probably Ulster’s finest team their most credible shot at the trophy.

It’s been three years since Leicester’s 13th and most recent appearance in the knockout stages.

This latest meeting finds two teams seeking to redress unexceptional campaigns, under new head coaches and in decidedly patchy form. After a gutsy four-game unbeaten start to the season, Ulster suffered a record thumping away to Munster and a first home loss to Connacht in 58 years.

However, a lengthy casualty toll is being eased and they have been given a timely boost by the return to action from injury of Craig Gilroy, Jordi Murphy, Will Addison, Michael Lowry and Marty Moore. Lowry starts at fullback, Gilroy on the right wing and Addison at outside centre. Up front, Ross Kane comes in at tight-head and Murphy at openside in a reshuffled and well-balanced looking backrow in place of the suspended Matty Rea.

Amazingly, and crucially, this will constitute a long-awaited European debut in his third season for the previously injury bedevilled Marcell Coetzee. Murphy, Addison, and Billy Burns will make their Champions Cup debuts for Ulster, having previously represented other clubs in the competition, and as will Moore most likely. The ex-Leinster tight-head is in line to make his first appearance for Ulster after recovering from a calf injury after being named in what is a relatively callow-looking bench.

Leicester welcome back Wallabies duo Matt Toomua and Tatafu Polota-Nau from duty in the Rugby Championship, and Murphy names them among their replacements, while making just two changes to his starting line-up.

Jonny May misses out with the shoulder injury suffered in the win over Northampton Saints at Twickenham last Saturday, giving Jordan Olowofela an opportunity on the wing, and there is a change in the forward pack where David Denton is ruled out and Brendon O’Connor returns.

This is the fifth time they have been paired together in the pool stages, and the Tigers have a surprisingly grim record in Belfast, where they have lost on all of their previous four visits and usually quite heavily as well – Ulster’s average winning margin in the four games being 23 points.

With Ulster also having won on one of their four trips to Welford Road, they lead the head to head by five wins to three. Furthermore, while the Tigers are rightly renowned for being the only team to have stormed Thomond Park and beaten Munster twice in the latter’s European citadel, they have lost on seven of their last eight trips to Ireland in the tournament, their 31-19 victory over Munster in 2015 being their only victory in that time. Leicester also finished last season’s Euro campaign with four straight defeats, their worst ever in the competition.

They arrive on the back of successive wins, and are the Premiership’s third most prolific points scorers, and fullback Jonah Holmes is a particularly dangerous, broken field, counter-attacking runner.

It looks a particularly hard game to call between two erratic, injury afflicted teams who have still to settle. Home advantage is huge in this competition and this fixture, albeit the odds point to a closer contest than is generally the case between these two.

Given their recent injury disruptions and setbacks, Ulster will assuredly keep it simple, and have the ball-carrying ballast in Iain Henderson, Coetzee, Nick Timoney and the in-form Stuart McCloskey to get the job done.

Gordon D’Arcy: Where is Ireland’s progress under David Nucifora? 06:00
Johnny Sexton hopeful he will play on until the next World Cup 06:00
Darragh Ó Sé: Managers have steered three contenders to a better place 06:00
Seán Moran: Waterford give hurling an underdog story of its own 06:00
James Horan happy with the quality of Mayo’s young guns 01:00
Crossword Get access to over 6,000 interactive crosswords