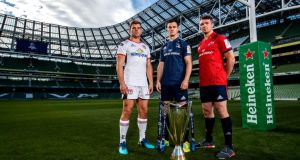 The nights are drawing in. There’s a bit of crisp in the air. The summer of love is over. Those aching, yawning few months of heat - those hours spent blissfully in the beer garden - are a distant memory.

Over the past month Europe’s heavyweights have been shaking off the rust. The continent’s finest machines are creaking into action. The gears are starting to click and the engines beginning to whir.

The Heineken Cup is back.

Between Friday October 12th and Saturday May 11th 20 of the best teams on the planet will slug it out in a bid to be crowned champions of Europe. The ultimate accolade.

And it all begins in Dublin, as Leinster - four stars proudly on their chests - start their title defence against Wasps.

But before the first ball is kicked under the Friday night lights, here is all you need to know about Heineken Champions Cup.

20 teams from Ireland, England, Scotland, Wales, and France - in theory, the cream of the domestic crop - bidding to be named European champions.

When did it start?

This is the 24th instalment of the competition, after its inception in the 1995-96 season.

The teams are split into five pools of four. Each team play one another home and away, with the top team in each pool progressing into the quarter-finals. They are then joined by three highest ranking second-placed sides across the three pools. The quarter-finals are seeded - meaning the four pool winners with the most points will earn potentially vital home advantage in the last eight. Semi-finals follow before the final at Newcastle’s St James’ Park.

I thought it was called the Champions Cup these days?

Well, it was. But this season Heineken have returned as chief sponsors, giving us the rebranded Heineken Champions Cup. In fairness, it’s always been the Heineken Cup - it just sounds right, doesn’t it?

When does it start?

The first round of fixtures begin on the weekend of Friday October 12th.

And what happens after that?

This is the first season where it hasn’t been a prerequisite for there to be an Italian side in the competition, with the seven Pro14 representatives all being decided on merit. An elitist move, but one which strengthens the tournament somewhat.

What are the pools?

Who are the defending champions?

Leinster were supreme last season as they conquered all before them domestically and on the continent.

Who’s won it the most?

Leinster’s victory last term put them level on four titles with the mighty Stade Toulousain - for so long the benchmark of European rugby. Munster have won it twice, while Ulster lifted the trophy in 1999.

Who’s going to win it this year?

Leinster are the bookies favourites to defend their crown at 2-1. The rest of the field are priced as follows:

Every fixture is being televised - but there’s good news. This season, you can watch some of the games without needing a subscription to BT Sport.

You mean, free to air rugby?

You bet. Watching sport has become an increasingly complicated and expensive business. But in a refreshing move, one game from each round of this year’s competition will be shown on terrestrial television, as well as one quarter-final, one semi-final and the final. In Ireland TV3/Virgin Media One have the rights, while in the UK you can watch on Channel 4. What a time to be alive.

So which games can I watch for free?

I can’t wait to watch today’s match legally, rather than streaming it on my laptop!