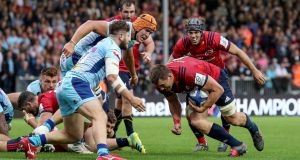 Oh no, Joey. Old generals named O’Gara and Sexton will enjoy his late error, knowing it’s the only way to truly learn. The wind was the 22-year-old’s ally until betraying him in the 80th minute.

But Munster, in this bright new era, look alive and well.

They survived. For Exeter it will feel like a loss.

“I’ve a few emotions,” said Rob Baxter, the esteemed Exeter coach. “We didn’t grab the game by the scruff of its neck in the opening 25 minutes. That cost us.”

Pandemonium! The Munster effect visits the south east of England and, like every Premiership club, Baxter’s men are yet to solve the provincial Irish conundrum.

Ewers returned after passing the HIA, Skinner did not.

The awful, accidental head collision happened as Tommy O’Donnell charged towards the posts. Stander finished the move off, and Joey Carbery levelled matters at 10-10 with 15 minutes to run in this brutal, hugely entertaining return of European rugby.

Munster might have accepted the scoreboard hours before kick-off but having sliced their attacking blade agonisingly close to Exeter’s jugular on several occasions they set sail for Shannon airport with plenty of regret.

Still, they made a statement. Constant tomahawk chants could not transform Sandy Park into the usual Indian burial ground for visitors.

Too much red about the place, a rising tide whenever an English giant was felled.

Too much Tadhg Beirne and Carbery guile, far too much Peter O’Mahony street smarts (Jerome Garces eventually clocked the early lineout lifting) and plenty more besides.

Nothing rattles them anymore. Certainly not the stripping bare of the scrumhalf reserves as Williams showed time and again, his misjudged box kicking into a swirl aside, the veteran halfback relished this rare moment under grey Exeter skies.

The unbeaten hosts sought to rip Munster heads clean off with Beirne losing his blue scrum cap in the opening exchanges. They need to go lower to stymie the Kildare bruiser.

The stadium was rammed – 12,749 bodies – with heavy blotches of early morning fliers opening their vocal chords when Dave Kilcoyne forced a scrum penalty out of tighthead Harry Williams. Munster perhaps back-slapped too readily as this was not their domain.

Gareth Steenson, Ulster exile, local leader, opened the scoring with a clipped penalty on 18 minutes when Niall Scannell was punished for colouring outside the lines.

O’Mahony complained nonetheless. He knows this French referee as well as any of them.

So much activity on the ground, Luke Cowan-Dickie’s superb turnover was matched moments after by Beirne’s arched frame and clean rip. This sparked a Munster march of 28 phases deep into the Exeter 22. Both Carbery and Williams displayed slick passing range with more transgressions over the invisible line gifting Carbery a chance to level matters.

Nobody was shying away from the fight. Henry Slade flung ball into touch that was an inch off Santiago Cordero racing clear.

So came Exeter’s trudge towards the scoring zone. When their heavies came Munster had no answer as Ewers shunted Cowan-Dickie over .

Andrew Conway’s sprint proved a fraction off the block down but he landed on the Exeter outhalf. Steenson stayed down, got the full neck review from medics before regaining his feet.

Garces waited, checked the replay and gave Conway a pass. The majority of referees in the current safety-climate would have flashed yellow, the minority red, this French whistler prefers his own tune.

Conway was first down the tunnel, poker faced but surely relieved – 10-3 was nothing in this weather.

Bash, bash, who would blink? Who would falter?

Niall Scannell fell off Don Armand as Exeter finally stretched their legs but Beirne stooped and Cronin, Clohessy’s heir, came up with possession.

This was rugby from olden times. Rutting stags, Munster knew territory promised points but O’Mahony ignored the wind advantage on 49 minutes when instructing Carbery to punt for the corner.

The maul fractured and Chris Cloete dived over but Garces signalled an Exeter penalty. The O’Mahony Inquiry continued.

Poised on a windy knife edge, Van Graan, sitting beside the media, watched on riveted like the rest of us.

No more Chiefs chanting, no Fields of Athenry to interrupt this tense, blustery affair.

A Carbery offload sent Mike Haley dashing down the left but after Stander and Cronin barrelled closer to the line O’Mahony’s adventurous offload was intercepted by Cordero. The clearing kick caught the gale so Exeter were temporarily trapped. Slade’s left boot set them free (Ugo Moyne caught the ball on his TV perch).

The England centre then slipped up the left wing to put Matt Kvesic behind the cover but Williams tracked back to wrap and steal possession from Phil Dollman. Not many people will voice concern about the 32-year-old Cork man ever again. He saved Munster on his own.

When Conway pressured Cordero, off a Williams box kick, Stu Townsend put ball out on the full. This directly led to Stander’s try.

Carbery squared it up.

Players started dropping like modern rugby players tend to after so many nakedly violent collisions. Take Sammy Arnold’s eight-minute cameo only to be forced off for JJ Hanrahan.

Gruesome but thrilling to the bone.

Munster will only improve because Carbery is easing into a fascinating groove – his line kick on 73 minutes muted the Exeter crowd. He looked like someone else. A natural 10. Then, moments later, after Beirne stole a vital lineout, he looked exactly who he is – a very young man learning on the job.

Never mind, these points will prove of enormous value down the road.