Lure of All Black jersey no longer enough for Lima Sopoaga 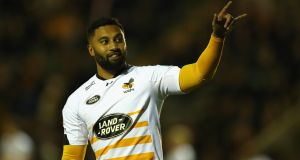 When Johnny Sexton looks across the scrum to Lima Sopoaga tonight, he may think to himself ‘yep know how you feel’.

Wasps’ marquee summer signing plays in his first Heineken Champions Cup having turned his back on the All Blacks. The Leinster captain reluctantly did that to Leinster five years ago although Sopoaga’s decision may cost him a place at the 2019 World Cup.

Sexton moved to Paris for two seasons in 2013 to play with Racing. It was done for commercial reasons. While Ireland, following self interest, did not cut Sexton from the Irish team as they have Ian Madigan and Simon Zebo, the 27-year-old outhalf Sopoaga with 18 caps for the All Blacks is unlikely to play for New Zealand again.

The Wasps playmaker may yet come to regret his phrase “the [All Black] jersey is no longer enough.”

But that’s the nature of modern professional rugby. He’s not the first to put salary before the silver fern. Aaron Cruden defected to France in 2017, when he signed a three-year deal with Montpellier.

Midi Libre reported that he would be paid €800,000 per season. The future of the 28-year-old Cruden had been the subject of considerable speculation as he had fallen behind Beauden Barrett in the All Blacks pecking order at outhalf.

Like Cruden, Sopoaga did the simple math. With Barrett in place and Damian McKenzie and Richie Mo’unga also vying for pitch time, Sopoaga had gotten to that place players very often find themselves. Cash or caps, family or All Black fame.

For years New Zealand had managed to hold on to the bulk of their leading players by refusing to pick those based abroad. It was simple. The incredible power of the black jersey guarded against a mass migration. Not any longer.

Sopoaga believes other players are ready to give their best years to Northern Hemisphere clubs offering lucrative contracts despite European Rugby’s ruling that ‘Each club is permitted a maximum of two ‘non-European players’ in each match squad’.

“For players these days, a lot of us are starting to talk to each other more and talk about experiences and about how we can benefit from the game, because it is a business and it can be pretty cut-throat. That’s the way it is. Players are starting to wise up to that.’’

Sopoaga would have been the likely Steve Hansen pick as understudy to Barrett in Tokyo. But he has chosen to follow others. Steven Luatua and former Ulster fullback Charles Piutau came before him, players from unglamorous backgrounds.

Piutau in 2015 quit the All Blacks at just 23-years-old. The youngest of 10 children, he grew up in the tough Auckland suburb of Mangere. Five girls and five boys. Piutau and his four brothers lived in the garage. His move to Bristol earns him €1.14 million a season.

Sopoaga signed a two-year deal with Wasps worth over €1.7 million, which is understood to be around double what he was earning in New Zealand. His priorities, he says, are his partner Miriam and a one-year-old daughter Milla.

“The chance to change your family’s life is pretty overwhelming and sometimes the jersey is not enough for a better life,” he explained.

Now, there are growing fears in New Zealand about what they see as an erosion of the All Black brand, one of the most potent symbols of success in world sport. Just weeks ago Hansen repeated his call to government to look at further funding of the team to help it retain its top-level players amid claims similar to those of Sopoaga, that the appeal of the jersey had waned.

Hansen initially aired his views when prime minister Jacinda Ardern and sports minister Grant Robertson visited the team after their 40-12 victory over the Wallabies at Eden Park in August.

But his appeal fell on deaf ears, Ardern advising that she could not see the organisation receive any further government funding than it already did and if it did, she would prefer it went to the community side of the game rather than subsidising professional salaries.

“I think it is a pattern,” added the outhalf.

“For a lot of guys like myself, who come from big families, from low socio-economic backgrounds, it is what is available. I think Charles [Piutau] is one of 12 or one of 14 so you can easily see why the riches of Europe for young guys in their teens appeal.”

It won’t change my life, Sopoaga added. It will change a few lives.