The Offload: Steve Hansen sees the value of coming straight at issues

Ireland picked Johnny Sexton when he played in Paris, so why not white-hot winger Zebo? 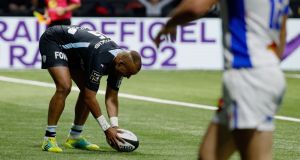 There’s a scene during Amazon Prime’s watchable All or Nothing: All Blacks documentary where Steve Hansen and his wife Natasha are in the back garden hammering nails into a massive black tarp.

“Otherwise,” Natasha explains with a smile, “we get people parked up and looking in.”

“It’s harder on Tash and the kids than me.”

“We often don’t go out at all,” she adds. “Everyone is staring at him, and by association us, so we stay home.”

And still, after all these years, Hansen sees the value of coming straight at issues. Kill a brewing story with honesty.

Take the inability of Beauden Barrett to drop a simple goal to beat South Africa. Ever since the other five million All Black coaches have been harping back to the 2007 World Cup quarter final meltdown against France when third choice outhalf Luke McAlister (Dan Carter and Nick Evans had both hobbled off) made a similar error of judgement.

“I think back to 2007 to the last time I can remember a game that was so poorly managed,” said Hansen this week. “All we had to do was take a really big breath, maybe take a shot at goal in the 66th minute...A drop goal wouldn’t be bad either, would it?

“We couldn’t do one of those in ’07 either because it’s not what the five-eight at that time was used to doing either. I don’t think Beauden has ever done one for the All Blacks. This team hasn’t had much adversity, so when you say Beauden will learn I think we all will.

The French media and Racing 92 coaches are using logic: Ireland picked Johnny Sexton when he played in Paris, why not the man who rattles off five tries in five days?

“If he continues on this rhythm,” said Racing coach Laurent Labit, “Simon Zebo will probably be recalled [by Ireland]”.

Labit must have missed the epic love story that is Zeebs and Joe.

Another exiled soul refusing to give up the Irish ghost is Bristol outhalf Ian Madigan. Despite rushing and missing an easy conversion, Madigan slotted five penalties as Pat Lam’s men beat Harlequins 20-13.

It’s established that players who move abroad are sacrificing Ireland selection, but coaches are almost encouraged to learn their trade on foreign fields.

“You want to get the best out of yourself and I feel [Canterbury] is where I can do that,” said Ronan O’Gara. “I feel I can be myself. I come from a different point of view but the boys seem interested in my opinion. I don’t have all the answers, they don’t either, so we need each other.”

With Joey Carbery already cutting defences open in Munster red and Will Addison looking slick for Ulster – 10 and 15 are hardly areas of Irish concern at the moment.

Be careful what you wish for. Geordan Murphy has sought a head coaching job for some time now. This week he felt the furnace heat that comes with the gig.

If an assistant coach said “the game’s gone too PC,” after Leicester’s Will Spencer’s red card for shoulder-to-head contact on Wasps Tommy Taylor, it would have caused a ripple of news. Murphy now knows when a Premiership coach speaks this way about a concussive blow in 2018 live on BT Sport it reverberates around the globe.

“That for me is crazy – it’s rugby – we need to start picking players under five foot,” Murphy sarcastically told Martin Bayfield before claiming the TMO felt it was a sending-off offence “when all the players, staff and coaches thought it was a good shot”.

Parents took issue with his comments. It put coaches of children in an impossible position. People tweaking the rules to safeguard the game’s long-term existence could only bury head in hands.

A few days passed before Murphy’s significant climb down: “My intention was not to belittle the laws.”

Potentially for the better. Player frustration centres on a lack of consistency by officials but keep putting them under this sort of pressure and they’ll inevitably fold – see the majority of GAA refs ignoring the black card for fear of ruining a game.

“We will make people aware around the facilities that players will use in the country that people with tattoos in a Rugby World Cup context are not part of the Yakuza, the Japanese mafia.”