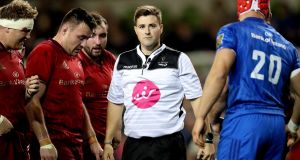 Ben Whitehouse was in the eye of the storm during Saturday’s Guinness Pro14 clash between Leinster and Munster at Aviva Stadium. Photograph: Billy Stickland/Inpho

Irish referees would leap into a Las Vegas octagon over Leinster versus Munster but it’s a rite of passage. The Welsh whistler was never going to come through Saturday’s game unscathed. Touch judges, Dan Jones and Mike English, along with agreeable Television Match Official Jon Mason didn’t help his cause.

Officials are increasingly dominating proceedings. Thankfully, the TMO’s influence will be reduced during the November Test window to foul play and score confirmation.

This stop-start yet compelling derby swung on Whitehouse denying Keith Earls an intercept ‘try’ to award Leinster a 42nd penalty that led to James Lowe’s second acrobatic touch down.

“It was a 14-point swing,” said Munster coach Johann van Graan of Sammy Arnold being harshly pulled back for a deliberate knock-on before Earls took off. “All I can say is we want consistency.”

Whitehouse, to be fair, felt he had to award a penalty try and sin bin Earls in the 11th minute as by the “letter of the law” there was contact with Lowe that arguably denied the latter a score.

“Peter, I am asking you very politely . . ,.” Whitehouse pleaded when the Munster captain disagreed. “There is nothing we can do.”

What made Munster’s blood boil was the absence of a penalty try or yellow card (presumably for Andrew Porter) leading up to Alby Mathewson’s 66th minute score.

“Look, if you concede three penalties five yards from your line, sometimes you get a yellow card,” was all Van Graan would add.

Whitehouse is an assertive, improving ref but the prolonged chatter between TMO, touch judges and captains gave the Aviva a baseball stadium feel with a constant stream towards the food and beverage counters.

“Don’t drink the Kool-Aid,” a former editor wisely advised. “They’ll never respect you if they can control what you write.”

“The journalists I always had more time for were the ones who didn’t just show up to the press conferences at Carton House, but who came to watch training afterwards. Players notice that.”

Slight problem, Donncha: Josef Schmidt. The Ireland coach, and his predecessors for the most part, would have a conniption if reporters are spotted anywhere near the paddock.

“In my media work I hope to interview more players and think there may be a gap in the market for somebody who asks short questions.”

Can’t wait for this.

The 39-year-old also expressed concern about the changing dynamic between “journalists and athletes”. Actually, there remains a healthy distrust and even the occasional bout of animosity.

It’s not all bad. Johnny Sexton treats reporters like fellow human beings and Peter O’Mahony can be intimidating but rewarding if presented with the pointed questions O’Callaghan wants to make his special domain. Maybe line up the Ireland-captain-in-waiting or how about a Conor Murray exclusive? Ask the probing (yet short) questions we all want answers to?

O’Callaghan’s Pat Geraghty memory saves the piece. Geraghty, the late Munster and Leinster Comms man, would slap the dictaphone from your hand if questions didn’t cease on his command. Then he’d defend you behind your back. It was never personal, just business.

The All Blacks survived Loftus Versfeld with a dramatic 32-30 victory over the Springboks on Saturday but was their age old Achilles heel revealed?

No, not Beauden Barrett’s place kicking – match winner Richie Mo’unga relieved him of those duties as Barrett shifted to fullback for the last 30 minutes – but it’s in midfield where New Zealand always seem to come unstuck.

See their 2003 World Cup exit after Leon McDonald shifted to centre when Tana Umaga was injured and Stirling Mortlock cut them open; see the 2007 defeat to France in Cardiff when they rested Aaron Mauger as Yannick Jauzion and Damian Traille horsed up the middle; see the 2017 Lions tour when Sonny Bill Williams self-destructed and Ryan Crotty pulled up lame before Johnny Sexton figured them out; see Springbok pairing Jesse Kriel and Damian De Allende cruising over for tries after Jack Goodhue’s late withdrawal. Manu Tuilagi and Garry Ringrose take note.

Seriously though, Rassie Erasmus’s South Africa have proven over two thrilling Test matches that these current All Blacks are beatable and sometimes even one-dimensional.

“I went into a lineout and went to call it and I just couldn’t remember any calls. Literally went into the huddle and I paused for 10 seconds. I think it was Andy Warwick asked ‘what do you want to call?’ And I was just looking at the ground. I couldn’t even think of the simplest lineout call and I was just standing there, and Big Al O’Connor said ‘I think we’ll do this one’, and I went into the lineout and still couldn’t think of it. The next break in play I said to Big Al ‘you’re going to need to call these lineouts because I can’t remember any of them’ and he said ‘there’s no point in you going on if you’re like this’.”

2 – kilos of hash, and €100,000 in cash, found in Zebre and Italy prop Sami Panico’s home, where he’s currently being detained under house arrest.