Saracens ready for 'only game that really means anything'

‘It doesn’t get any better than playing Leinster at the Aviva,’ says winger Sean Maitland 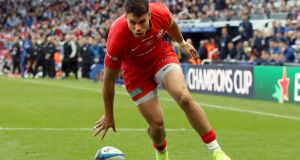 Few clubs, if any, in the professional era have suffered the kind of adversity which Saracens experienced this season. Amid enforced relegation for repeated salary cap breaches, the departure of several frontliners and a meaningless series of Premiership games since the resumption, unlike everyone else the lockdown was possibly a relief.

There’ll always be an asterisk beside their name at the end of this season, yet to retain their Champions Cup crown and win it for a fourth time in five years would possibly be their most cherished title of all. Finally, in Saturday’s quarter-final repeat of last season’s final against Leinster, they have a game that means not just something, but everything.

“It’s massive,” said their winger Sean Maitland yesterday. “I don’t have to say too much, European rugby and what’s gone on with this club in this competition for the last four or five years. It doesn’t get any better than playing Leinster at the Aviva.

“I know there’s not going to be any fans, which is a shame. We’ve played them in a quarter-final over there, then last year’s final, now the quarter-final again. I’m sure they have a lot of motivation to play us after last year. It’s a massive game, it’s European rugby, and it’s the only game that really means anything,” said Maitland, when putting this game into the context of their season.

“They’re the form team and they’ll be coming into this game full of confidence after winning the Pro14. For us, it’s about matching them physically. They’re a team that loves winning the gain line, playing the ball through Johnny. It’s about stopping their momentum.

“The second thing is stopping their kicking game. Johnny loves to manipulate the backfield so for me on the wing it’s about trying to read his body language and the pictures he presents, and just try to shut that down.”

To that end, the suspended Owen Farrell has been doing his best impersonation of Sexton on the training ground.

When fit, Maitland is presumably one of the first names on Mark McCall’s team sheet. Athletic and tall (6ft 1in), with a good technique in the air, Maitland almost never seems to make a mistake and makes finishing look easy.

The London-based kilted Kiwi turned 32 on Monday and has a wealth of experience in a garlanded career. He is a World Cup Under-19 and Under-20 winner with New Zealand, a Super Rugby winner with the Crusaders, a Pro12 winner with Glasgow (albeit he missed the final against Munster in 2015) and is twice a winner of both the Champions Cup and English Premiership with Saracens.

Maitland also missed the 2017 Euro final against Clermont due to an ankle injury the week beforehand, but to underline his big game temperament, he was a try scorer in both of last season’s finals, against Leinster in Newcastle and Exeter in Twickenham. Maitland was also a British and Irish Lion on the 2013 tour to Australia and has 48 caps for Scotland.

He’s now one of the team’s leaders and says: “We’ve had a few curve balls thrown at us and that’s how the season has gone for us, but one of the good things has been our leadership group and how we approach every game.”

He added: “We’ve got a couple of legends at the club and this is going to be their last season, so we’ve got a lot of things to play for”, in reference to departing captain Brad Barritt, George Kruis and Richard Wigglesworth. “We want to win this competition, beat Leinster, but also do it for these lads who have given so much to the club.”

It’s also a measure of Saracens’ close-knit culture that although several have moved on – some on one-year loans – many heavy hitters have committed to remain, Maitland among them.

“I just turned 32 yesterday so I’m not getting any younger. I love it here and would love to have been playing in the Premiership next year. The club have done so much for me. I’ve got two young kids and one on the way, so for me to leave it would have been a bit of a logistical nightmare,” said Maitland, who has two daughters with his wife Nava, namely Lucy (3) and Lily (1).

“I’m happy here and to stay another couple of years, and hopefully get back from the championship. Next year will be good for my body. Hopefully I’ll get plenty of rest which would be a big positive for myself. Then to try and come back up to the prem the year after and try to win something, that would be something special in the history books.

“That excites me, but it would be amazing to beat Leinster given how the season has gone and the adversity we’ve had to put up with. That would be pretty special but we know it’s going to be a big game and it’s going to be tough as well.”

They travel with belief too.

“We’ve got nothing to lose and it’s going to be special. You gotta be confident. You can’t be going to the Aviva and not giving it your all.”