Impossible is nothing. Beating Leinster, though, might be trickier 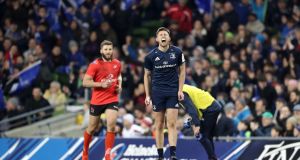 Leinster’s Ross Byrne reacts after kicking a penalty to take the lead over Ulster in the Heineken Champions Cup quarter-final a, Aviva Stadium, Dublin in March 2019. Photograph: Billy Stickland/Inpho

Andrew Trimble had enough belief in himself to make a game-altering tackle during Ireland’s monumental victory over the All Blacks in Chicago on November 5th, 2016. The Ulster winger turned podcaster will forever be remembered for smashing Liam Squire so cleanly that the ball was loosened from the Kiwi blindside’s grip.

The next 90 seconds are set in stone. Finlay Bealham survives a creaking scrum. Joey Carbery and Jared Payne fling perfect skip passes to find Simon Zebo, who chips 40 metres downfield to where Conor Murray empties Julian “The Bus” Savea over the dead ball line. From the resulting scrum, Jamie Heaslip picks and floats a ball for Robbie Henshaw to power past Sam Cane and over TJ Perenara.

Impossible is nothing. Just do it. All the sports clothing slogans you can imagine in one beautiful stream of consciousness.

Trimble managed this, and plenty more in a green jersey, without ever getting his head around journeying south to beat Leinster.

“Going down to Dublin, it’s a thankless task,” he told Second Captains. “You never really get that optimistic about it . . . But the young fellas in Ulster at the minute, it’s almost a level of naivety where they can go down there and say, ‘Let’s just throw the ball about a bit and express ourselves. Let’s do the opposite of what Munster did.’”

Trimble and Dan McFarland were like ships passing through the Harland and Wolff yard. Same goes for most of the previous Ulster generation, who finished up just before McFarland arrived to make – according to Rory Best’s autobiography – “everyone realise how important training is” with a “speed to contact” philosophy.

Ulster sessions this week, like every week since the IRFU pried the Englishman from his Scottish employer in 2018, are all about the most important two seconds in rugby.

“Dan records all the action from ‘ball carry’ to ‘ball available’ and he wants it to be less than two seconds on average for the whole game,” wrote Best. “That is timed from when a player hits the deck and reaches back to when the scrumhalf clears the ball.”

If Ulster get into their flow, the opposition or venue no longer matters. Just as we witnessed the last time Dan Leavy played a game of rugby. The way Ulster dragged Leinster into that epic Champions Cup quarter-final at the Aviva stadium in April 2019 provides a neat jumping-off point for Saturday’s performance.

The memory of that defeat still burns. Jacob Stockdale’s fumble over the try line and John Cooney’s missed conversion, to edge Ulster 20-18 ahead on 65 minutes, remain the lost nine points in a three-point defeat.

The rapid pace McFarland demands from every player – hence the selection of mobile props over heavy-set veterans – is the coach’s attempt to mesh the best lessons he was taught by two very different mentors.

“On a Thursday we train for just 23 minutes but it is full-tilt,” Best revealed. “‘No, no time for water breaks,’ [McFarland] will shout.

“He learned the breakdown stuff from Joe and the speed thing from Gregor Townsend. Dan told us that the speed Gregor expects from Scotland is frightening.”

There is a bit of narcissism about Dan, as there is with all the really good coaches

“We are not there yet, but we are getting there,” McFarland told Best.

To have any chance on Saturday night, Ulster need to be there by now.

McFarland (48) will surely relish the tactical duel with Stuart Lancaster (50). His star is rising after the ruthless substitutions of John Cooney and Billy Burns led directly to victory over Edinburgh at Murrayfield last week. Ian Madigan got the plaudits for converting two high-pressure kicks, but it was McFarland who turned certain defeat into an improbable victory by removing his goal kicker at half-time and his captain not long after.

“There is a bit of narcissism about Dan, as there is with all the really good coaches,” Best continued. “They always have to think that their ideas are the best.”

Even better than Lancaster’s?

We soon shall see.

Ulster should interpret the selection of Ross Byrne over Johnny Sexton as a straight insult. Leinster have form in this regard, and clearly Leo Cullen and Lancaster trust Byrne in big games, but benching the best strategic 10 in the world for a final can only be used as a motivation by the opposition. Saracens are perceived as the greater threat.

Burns needs to make them pay. The Irish-qualified English outhalf must be eyeing up the opportunity to establish himself as the primary cover in Andy Farrell’s squad.

Burns is McFarland’s captain for good reason. The injured Iain Henderson cannot be replaced but the 26-year-old appears to be mature enough to match Sexton’s decision-making abilities in the split second before a flanker’s shoulder finds its target.

Can they be as clinical and ruthless as Leinster have been all season? It is a big, big ask

None of this is sufficient evidence to bet on Ulster, even with an attractive 11-point handicap, but examining how McFarland’s men came so close to toppling Leinster last year offers plenty of routes towards a giant upset.

For starters, Sexton was injured so Byrne started at 10. Best planted the seeds of doubt with an early block down on Garry Ringrose that allowed Kieran Treadwell gather and fall over the line. Twenty-five relentless phases later and Byrne powered under Rob Baloucoune. The outhalf missed the conversion so Ulster still led 7-5 with 12 breathless minutes on the clock. The pace refused to slow until Stockdale’s error in the 46th minute with Ulster leading 13-11.

Stockdale was already the master of obliterating teams down the short side. The opportunity came from Stuart McCloskey (1.8 seconds) and Jordi Murphy (1.6 seconds) breaching the gainline one after the other. Lovely soft hands by Burns and a decoy run by Baloucoune allowed Stockdale to storm through a gap and past some weak defending by Jordan Larmour. But the sequel to his brilliant try against New Zealand was denied by Dave Kearney’s never-say-die attitude and an attempted left hand finish.

“They are more than capable of getting their game up to the level to compete,” said Trimble, “but can they be as clinical and ruthless as Leinster have been all season? It is a big, big ask.”

Ireland training under Joe Schmidt became so robotically error-free that everyone started to believe that victory was achievable in Chicago, Twickenham, Paris or wherever they roamed between 2014 and February 2019.

Sliding door moments are a waste of time but imagine Ulster took a 20-11 lead early in that second half. Leinster would have been forced into the sort of hole they have only experienced once since: the defeat to Saracens in May 2019.

That’s how Leinster or any team on a similar winning streak comes undone. Drive the doubt deep into their psyche by continually amassing points.

That was then. The latest iteration of McFarland’s Ulster must produce similar heroics to Trimble in Soldier Field while devouring the nine points they left behind in 2019. To ignite an actual rivalry the coach must identify opportunities the rest of us cannot see and hope that that includes Lancaster.

Impossible is nothing. Just do it.