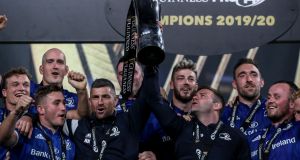 In many ways this will seem like both the best and the worst of Leinster’s last three titles in succession.

They’ve come back from the five-month hiatus seemingly fitter, stronger, more focused, impenetrable and unbeatable than ever to seal the deal with a 27-5 win over Ulster in the Aviva Stadium on Saturday night.

This was their most complete triumph, but of course there was no crowd there to witness it, no sense of occasions, albeit they’ve even managed to ensure that this empty, cantilevered echo chamber had remained a fortress. They’ve now won 21 out of 22 Guinness Pro14 games here.

It seemed cruel in particular to keep the squad waiting while a sponsors’ stage with inflated backdrop was swiftly erected – the backdrop of the lawnmowers whirring away already – as eir Sport took their advertisement break before the trophy presentation.

Even so, the squad made the best of it. Johnny Sexton and captain for the night Garry Ringrose presented the medals before the departing Rob Kearney and Fergus McFadden jointly in as they lifted the trophy and then the players sang, danced and posed with the normal gusto of crowned champions.

Leo Cullen couldn’t help but think of the others in the rota of 53 players who contributed to this triumph or absent family, friends and supporters, who were not present.

“Less people in the ground as I’m sure you’re all aware,” chuckled the Leinster head coach dryly when asked what was the difference between these and previous triumphs.

“It was a reasonably hostile atmosphere in Glasgow last year, when we were here against Scarlets two years ago, it was great because it was off the back of that sequence of three games – Racing away in Bilbao, Munster in the RDS and Scarlets here, and we’d lost to Scarlets in the semi-final of that tournament the previous year. That was a great day as well.”

“It’s different. My biggest piece is around the match squad, but the other guys, the wider group who have played a ton of minutes, there are 20 odd players that aren’t here. I’d love to be congratulating them on their work and contribution throughout the course of the campaign.”

“As we know, we need a huge squad effort to get to this point. That’s been the hardest piece personally, having some of those conversations over the last few weeks. It is what it is, we understand the reasons why that is, it is important to acknowledge it but also we have to acknowledge the current situation as well.”

The numbers are more than a little startling when you put them all together. Not only have Leinster completed the most dominant title success yet in this competition, with 17 wins from 17 games, they’ve extended their winning run in both competitions to 25. This dates back to their Heineken Champions Cup final defeat in Newcastle last May by Saracens, whom they host in a revenge mission here next Saturday in the 2019-20 quarter-finals.

Cullen cited the quality of the backroom team in addition to the coaching ticket, as critical to Leinster’s success. He referenced Guy Eastertby’s recruitment and the performance team, headed by Charlie Higgins.

“He’s an exceptional individual in terms of the quality of work he delivers,” said Cullen.

Then turning his attention to the quality and depth of his playing squad, Cullen admitted: “There are times when selection has been very, very tough and this period has been tough for a number of guys because it’s not straightforward, some guys would feel that maybe they haven’t got a full crack at it over the last couple of weeks and they’re probably right to say that they think that.

“But they’ve got to park that and do what’s best for the team and prepare the team well. Some of the training sessions we’ve had over the last couple of weeks have been excellent, so it’s just everyone pulling together and to go through the whole season unbeaten, it’s a great effort from everybody and that’s never down to one person, clearly.

“So that’s the whole kind of mantra, we can’t rely on one person. The next person has to be able to step in.”

Despite winning when pulling away, the scary thing is Leinster were again not quite at their best yet. Once more they were heavily pinged at the breakdown, losing the penalty count 15-10, and they also left chances behind and lost four lineouts. Cullen acknowledged they’ll need to be better against Saracens.

“Yeah definitely. Saracens on their day, we know the threats that they have, they’ve had some changes but they still have such quality throughout their team, some world class players in there so we need to make sure we’re peaking week on week basically at the moment.

“It’s week four on the return, we’ve had four very physical games against the Irish teams which puts us in a good place for Europe which is obviously a different challenge against an English team that has been playing in a different league, even interpretations of the game, how it is being refereed, so we’ll see how it goes.

“Pascal Gauzere is the referee, he referees in the Top 14 so it’s games refereed from three different leagues really so we’ll see what it’s like. For us now, it’s enjoy the moment, have a nice bit of time in the dressing room with the group that is lucky enough to be here. We’ll put a plan in place on Monday.”

A victory over Saracens would earn a home semi-final a week later against either Clermont or Racing, with the prize of a final three weeks later (after their defence of this Pro14 trophy has already begun).

Irish Open 2020: Galgorm Castle hole-by-hole guide 06:00
Rugby Stats: Saracens superiority at scrum time key to victory over Leinster 06:00
Irish Open 2020: Four players to watch out for 07:01
Marty McGrath and Ederney hoping to bridge a long gap in Fermanagh 06:00
Sonia O’Sullivan: 20 years on and memories of that Sydney final flood back 06:00
Here is your handy guide to sport on television this week