Ulster know they have game to spoil Leinster’s party 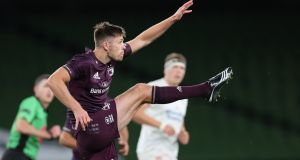 Leinster’s Ross Byrne has been tasked with the outhalf position for the Pro14 final against Ulster. Photo: Billy Stickland/Inpho

Just when it seemed Leinster were running out of landmarks, along come a bunch of new ones. Here they are then, within one game of a record seventh title, a first three-in-a-row and, perhaps best of all, an unblemished 17-game run to emulate the 10-game winning sequence of the inaugural 2001-02 champions.

They finished a whopping 25 points ahead of Ulster in Conference A, having beaten them a fortnight ago with just four of tonight’s starting XV when resting frontliners, and go into this game as 11-point favourites.

But while that table underlined the extent to which they have a better squad than Ulster, or anyone else for that matter, this is a final and as Dan McFarland’s side showed in last season’s titanic Champions Cup quarter-final, on a given day they have a matchday 23 to go toe-to-toe with the champions.

That game remains the most relevant benchmark.

“Yeah, I think that’s fair to say,” admitted Leo Cullen yesterday. “What are teams like when everything is at stake? The winners get the prize and the losers get nothing. It’s important that we understand that dynamic when it really comes down to it.

“They really put it up to us that day. We rode our luck at different stages so we need to make sure that we get all our bits right so we’re not relying on the opposition coming up with the odd error, here and there, that is going to win us the game. We need to go out and put in a performance that is good enough to win us the game on merit. That’s what we’ve tried to focus on this week.”

Garry Ringrose, who described being named as captain for the first time in light of Johnny Sexton as the biggest honour of his career, readily admitted: “I think we were lucky that day to win. So, yeah, to go into this game taking anything for granted on previous results would be the downfall. We understand it. Ulster are coming to the Aviva to win and we’ve to do the same.”

Although Ringrose is the only starting survivor from the defeat to Connacht in the 2016 final, there’s plenty in the squad and the organisation who’ve experienced final losses before.

Ringrose also had a kick charged down last season for Kieran Treadwell to score the opening try and, but for Jacob Stockdale’s aberration when failing to ground the ball for a 46th minute try, Ulster would have led 18-11 with the conversion to come.

Ultimately Leinster pounded Ulster, and virtually themselves, into submission with a 44-phase attack in the final play of that Thrilla in the Aviva. But Ulster weren’t going down.

They’ll arrive buoyed by that and their stirring comeback win in last Saturday’s semi-final in Edinburgh. Unlike Munster, they’ll have a go and take risks.

In also making four changes, McFarland has gone with form. There was an altogether better balance to their back three in attack and defence when Michael Lowry was introduced at half-time, with Stockdale – defensively vulnerable at ‘15’ – more effective on the wing. The electric footwork and acceleration, and attitude, of Rob Lyttle is a real threat.

It’s liable to go deep into the last quarter, and any bench with Johnny Sexton, Luke McGrath, Scott Fardy and Will Connors doesn’t lack oomph. But Ulster’s looks to have plenty of impact in it as well, not least with six ex-Leinster players straining at the leash.

Their trophy drought is even longer than Munster’s, dating back to 2006 in this competition, and they are ravenous.

“As a group we forge our own identity and we want to achieve for our own sake,” said McFarland yesterday. “It’s not a question of history for us, it’s a question of living where our feet are. If we go in and do our very best and win a trophy it’s something that we’ll remember as a group forever. That’s what we want.”

No less than Munster, Ulster have a dismal record in Dublin (one win in 20 years) and particularly in the Aviva, having not beaten Leinster in this ground since October 1989 at the old Lansdowne Road, whereas Leinster have won 20 of 21 games here in the Pro14. Leinster also have a habit of ending Ulster’s season (six times in semis or finals in the last decade) which has long since gone beyond annoying.

Whatever about Ulster eyeing up Toulouse, perhaps Leinster have one eye on Saracens a week hence, but too much can be made of Sexton being held back. Ross Byrne knows the systems inside out and his trademark cross kick is bound to bring James Lowe into the game, while the under-rated Jamison Gibson-Park is a seriously accomplished scrumhalf who will maintain Leinster’s tempo and manage the game.

Irish Open 2020: Galgorm Castle hole-by-hole guide 06:00
Rugby Stats: Saracens superiority at scrum time key to victory over Leinster 06:00
Irish Open 2020: Four players to watch out for 07:01
Marty McGrath and Ederney hoping to bridge a long gap in Fermanagh 06:00
Sonia O’Sullivan: 20 years on and memories of that Sydney final flood back 06:00
Here is your handy guide to sport on television this week