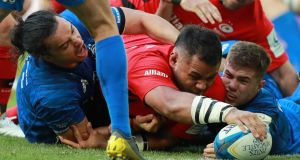 Billy Vunipola of Saracens touches down to score his team’s second try during the Champions Cup Final match between Saracens and Leinster at St James’s Park last year. Photograph: Getty

Everything about the match-up, primarily the whiff of vengeance for the defeat in the final at St James’s Park in May last year to Saracens being relegated last January due to repeated breaches of the salary cap regulations, had made this the one.

Furthermore, it’s hard to think of any leading club in Europe who will be so utterly unaffected by the absence of cheering supporters. For a 50,000 capacity crowd in Dublin, like the quarter-finals two seasons ago when Leinster dethroned them by 30-19, Saracens most probably would have brought a mere 1,000-1,500 travelling fans.

Indeed, in this era of hyperanimated teams, Saracens lead the way and one can well imagine there will be more noise emanating from the visiting ranks next Saturday. Even pre-lockdown, and then empty stadiums post-lockdown, there didn’t seem to be much reward for Leinster in qualifying for the last eight as top seeds, and there seems even less now.

Ever since Saracens squeezed into the knock-out stages and earned a tilt at Leinster they have been targeting this quarter-final for eight months.

Accordingly, as their defence and forwards’ coach Alex Sanderson effectively admitted after last Sunday’s relatively meaningless 40-17 win over the Exeter Chiefs between hugely experimental and young sides, every one of their six games since the resumption has been with this quarter-final in mind.

Indeed, it seemed as if they used their game against London Irish three weeks ago as a training ground for their potent maul, which powered over the line for three of their six tries that day and effectively paved the way for fourth.

The likelihood is that none of their frontline XV appeared last Sunday, prior to which head coach Mark McCall conceded that his starting team had already been picked. Virtually all of them have been given a two-week run-in into this game since playing in their 28-18 defeat by in-form Wasps, which pivoted on the much publicised sending off of Owen Farrell.

Of course, Farrell’s absence is a huge loss, and the expectation is that fullback Alex Goode will be chosen at outhalf rather than the 20-year-old Manu Vunipola, even though he has started four of their last five games, landing 16 of his 24 kicks in scoring 43 points.

Saracens have been weakened by the departures which followed confirmation of their relegation. Of the 23 who lined up against Leinster in Newcastle in May of last year, in addition to Farrell a further 10 have moved on.

With many of them rejoining after what should be a fairly routine promotion push in the championship, not least given their own conveyor belt of talent through the Saracens academy, however the club signs off this season they won’t be gone for good.

In addition, Maro Itoje, Mako and Billy Vunipola, Farrell, Jamie George and Elliot Daly have all confirmed they will be staying with the club next season after their relegation from the Premiership for breaching salary cap rules. It’s reckoned that Mako Vunipola may well have recovered from his back problem to play against Leinster and they also signed the Welsh scrumhalf Aled Davies from the Ospreys at the end of May.

Stuart Lancaster has speculated that the Saracens theme for this finale, and especially their attempt to defend their Champions Cup crown, might well be The Last Dance, in reference to the Netflix series on the Chciago Bulls’ last throw of the dice for the Michael Jordan generation.

It might seem a stretch to bracket Brad Barritt in the same company as the basketball icon, but the redoubtable and resilient 34-year-old has been a hugely influential figure within Saracens over the last 12 years, overcoming all manner of injuries to play more than 200 games for the club.

The Saracens’ captain and leader of their famed Wolf Pack defence has also extended his contract until the end of this relaunched 2019-20 campaign and this will only add to the deep reserves of emotional energy, as well as physical power, the reigning European champions will bring to Dublin. They also know they won’t have another Champions Cup campaign for at least the next two seasons.

They will again dip into their Millwallesque “no one likes us but we don’t care” mentality and also in labeling themselves, as Sanderson put it, as “by far and away the huge underdogs”.

By rights, it could easily have been the final again. Between them, Saracens and Leinster have won the last four European Cups, and Leinster are seeking to emulate Saracens’ double by recording a second one of their own in three seasons, and also become the first team to complete an unbeaten campaign.

While it’s great that the Toulouse-Ulster quarter-final on Sunday will be televised on Virgin Media and Channel 4, it’s a terrible pity that this reprise of last season’s final is confined to BT Sport and thus isn’t on terrestrial television. It deserves a bigger audience, both inside and outside the Aviva.

Leinster will know full well that they are about to be tested physically, particularly by the Saracens pack, in a manner they haven’t been to date in their four wins since the resumption.

Because, come 3pm at the Aviva Stadium on Saturday, it’s all duck or no dinner for this Saracens team.

1 Gordon D’Arcy: If South Africa moves up north, it could all go south
2 Charlesland Golf Club set to close permanently in December
3 Davy Fitzgerald has issues with GAA’s plans for League final
4 South African franchises could join Pro16 by next March
5 When Down’s 1960 All-Ireland victory brought down barriers
Real news has value SUBSCRIBE