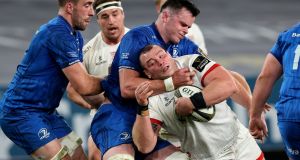 Leinster have confirmed James Ryan came through his return to action in the Pro14 final unscathed, with Saturday’s Champions Cup quarter-final clash against Saracens looming.

24-year-old Ireland lock Ryan returned from a shoulder injury in Saturday’s 27-5 final victory over Ulster at the Aviva Stadium.

And his province have confirmed he came through the emphatic victory with no issues, meaning he is set to be fit for this weekend’s crunch European clash.

Meanwhile there has been no significant update on the fitness of Lions prop Tadhg Furlong and backrow Dan Leavy, with Leinster saying both will be monitored throughout the week.

There could be a return to the matchday 23 for Fergus McFadden however, with the province confirming he will resume full training after recovering from a calf injury.

Connacht’s clash against Benetton postponed after Covid-19 outbreak at Italian club 19:36
Pádraig Harrington hot out of the blocks in Bermuda with opening 67 19:47
David Drysdale flying high with strong strong start at Cyprus Open 18:19
RFU charge 13 Barbarians players following Covid-19 protocol breaches 17:49
Sam Bennett stripped of a second stage win at this year’s Vuelta a España 19:38
Here is your handy guide to sport on television this week