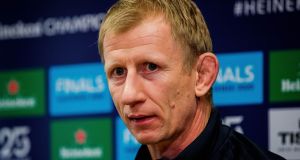 Leinster head coach Leo Cullen: ‘In certain circumstances, a losing bonus point is not the end of the world.’ Photograph: Ryan Byrne/Inpho

After a week of reviews, comment and counter-comment about the World Cup, the 15 Irish players in this Leinster squad can hardly claim to have gone unaffected by all the chatter. Ask any of them and they’ll say the release of a massive European game on English soil is just the tonic.

This is true. Nothing focuses the mind like the thump of a powerful Northampton pack that currently sits on top of the Premiership. Be sure that Stuart Lancaster has had Leinster players swotting up on the slick style delivered straight from the Wellington finishing school of legendary All Blacks like Jonah Lomu, Christian Cullen and Conrad Smith.

“With Chris Boyd’s background with the Hurricanes most recently and just the attacking mindset that team has, it paints a picture of a head coach that would lead a very attacking-oriented setup and team,” said Leinster coach Leo Cullen.

“In terms of the personal I think they’ve made some great signings. They’ve got that mix of real top end experience, guys who have done it on the biggest stage plus lots of very good young players. It adds to a really good youth and blend in terms of youth and experience.

“We know it’s going to be a real stern challenge for us.”

This is and isn’t true. For all the razor-sharp danger coming from a halfback pairing of Cobus Reinach and Dan Biggar – Springbok and Welsh World Cup heroes – there are glaring absentees like the Franks brothers from New Zealand, Owen and Ben, while any team is poorer for the unavailability of Courtney Lawes.

With that in mind, Cullen’s fully loaded squad should get out of the gap and be home for tea time with four valuable points.

Interestingly and encouragingly, the Leinster think tank appears to be selecting on current form. That means Tadhg Furlong, Luke McGrath and Rob Kearney must be satisfied with roles off the bench. Of course they will be fuming but Jamison Gibson-Park earns a start at scrumhalf as much as Jordan Larmour has at fullback with Andrew Porter now threatening to usurp the Lions tighthead in both blue and green jerseys.

Porter has been the good news story, amid a cacophony of misery, these past three months. Underused in Japan, new forwards coach Robin McBryde and Cullen cannot be accused of making the same mistake.

The rest of the team largely picks itself. That said, Caelan Doris can nail down the number eight slot before Max Deegan arrives.

Considering all the exterior noise, it’s a safe bet to expect a vintage Johnny Sexton display. You know what we mean by now. He’ll probably pick a scrap with Kiwi Teimana Harrison or Fijian giant Api Ratuniyarawa. Messing with either of them would be a bad idea but such confrontations are what gets the captain’s juices flowing.

Speaking of leadership, the 34-year-old has made no secret of wanting to fill Rory Best’s boots on the national stage and with the Six Nations sneaking up on everyone expect a decision on that front – Sexton, James Ryan or Peter O’Mahony – in the coming weeks.

The Saints have opted for two captains – Alex Waller and Harrison – as they figure out life without Dylan Hartley, who was recently forced into early retirement, but despite all the injury problems in Taqele Naiyaravoro they possess one of the sport’s most lethal weapons.

“In certain circumstances, a losing bonus point is not the end of the world,” Cullen added.

This is not one of those circumstances. Leinster know how to win at this ancient English rugby ground and Cullen knows all about the club he tussled with as a Leicester lock on epic west midlands derby days.

“Whatever situation we find ourselves in, it’s just about making sure we try and maximise every point we can from the fixture. It’s not trying to talk in clichés here, but it’s that piece of Europe that is a little bit unique isn’t it? Just trying to get everything we can possible from all these games.”

Leinster’s internationals have already moved on with their careers. A signature performance here allows everyone else to follow.