Leinster in a good place as they prepare for Northampton 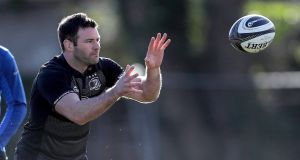 Fergus McFadden came through the victory over the Glasgow Warriors with a clean bill of health.

Leinster are in good stead from an injury perspective ahead of their Heineken Champions Cup match against the Northampton Saints at Franklin’s Gardens on Saturday (1.0), the first of successive games against the English Premiership club, both teams having won their opening fixtures in Europe.

Fergus McFadden came through the victory over the Glasgow Warriors with no ill effects from a minor elbow injury. Joe Tomane will train fully this week having recovered from a hamstring injury. Rory O’Loughlin will increase his training load, while so too will hooker Sean Cronin as he edges closer to a return over the coming weeks.

Josh Murphy suffered a head injury in the victory over Glasgow and was initially removed for a Head Injury Assessment (HIA) and did not return to the pitch. He is following the graduated return to play protocols. Loosehead prop Peter Dooley sustained a knee injury in the same match and was withdrawn at halftime.