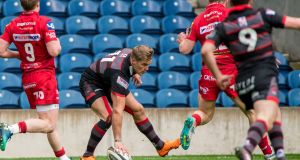 Edinburgh bounced back to form in emphatic fashion by running in eight tries in a 52-14 thrashing of Scarlets in a Guinness Pro14 clash at BT Murrayfield.

Richard Cockerill’s side scored four early tries and secured a crucial bonus point within 25 minutes before going on to claim an impressive win to put them in a strong position to clinch Champions Cup rugby next season.

Blair Kinghorn, Duhan van der Merwe, Sam Hidalgo-Clyne and Magnus Bradbury all crossed the whitewash in the first half as Edinburgh tightened their grip on third place in Conference B.

The win puts them nine points ahead of Ulster — although they have played a game more — with just one match left, making them favourites to secure a spot in the end of season play-offs.

Head coach Cockerill ramped up the pressure on his players this week and called for them to respond to a disappointing few weeks with a performance here.

They responded magnificently, playing with a freedom and pace that had been so absent in recent weeks.

Their early efforts were rewarded when James Johnstone made a half-break on the outside to go into the 22 and then offloaded to Kinghorn, who cruised over the line for a morale-boosting lead in just the seventh minute.

The release of tension was obvious, and they were two tries up in no time as Van der Merwe produced a moment of brilliance to hand Tom Varndell off before racing in from halfway just two minutes later.

It was a much-changed Scarlets line-up as they prepare for the last four of the European Champions Cup next week, and it showed, with Edinburgh much the stronger of the two sides.

After a brief spell of defending, they again scored from deep as Jaco van der Walt dummied from the base of a ruck and then sent through Hidalgo-Clyne, who had just enough pace to touch down in the corner to open a 19-0 lead after 19 minutes.

The crucial bonus point was secured just five minutes later as Bradbury touched down from close range to cap a dream 25 minutes for Cockerill.

The hosts were in danger of letting that start slip as Scarlets finally found their game and pulled one back through new arrival Tom Varndell before Dan Jones also crossed, but Edinburgh were back on top by the end of the half to take a 26-14 lead into the break.

The lively Hidalgo-Clyne eased any lingering nerves with a sharp break from the base of a scrum inside his own half and a smart kick bounced nicely for Van der Merwe to score his second, before Luke Crosbie finished off a slick team move for Edinburgh’s sixth try.

Mark Bennett and Nathan Fowles got in on the act late on as Edinburgh ran riot against last season’s champions.

1 Gerry Thornley: After 32 weeks the Six Nations is back up for grabs
2 Extremes of sweet and sour for Solskjaer as Man United show signs of revival
3 Johnny Sexton aware of how Ireland can offer fans an escape
4 Stockdale and Ringrose on board with expansive Irish game plan
5 Arsène Wenger: Arsenal was a matter of life and death to me
Real news has value SUBSCRIBE

O’Brien surprised at Buckhurst’s omission from Cox Plate 16:49
Johnny Murtagh to train for the Aga Khan in Ireland 16:40
Salwa Eid Naser cleared of anti-doping violation by World Athletics 16:38
Longford hand Cork a walkover in final Division 3 match 15:57
Johnny Sexton aware of how Ireland can offer fans an escape 15:34
Here is your handy guide to sport on television this week