Leinster turned over by determined Benetton at RDS 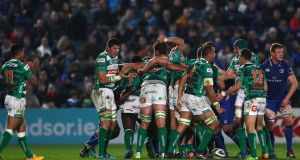 Benetton are awarded a penalty at the scrum during their Pro14 win over Leinster. Photo: James Crombie/Inpho

Leinster saw an opportunity to guarantee a home semi-final in the Guinness Pro14 disappear as they suffered a first ever defeat to an Italian team in Dublin. The Scarlets, in last year’s semi-final were the last team to win at the RDS.

Benetton thoroughly deserved to win this match, playing some cracking rugby and showing tremendous grit and determination to dig in when the occasion warranted. There’s no doubt that Leinster’s performance was off colour but it would be churlish not to acknowledge the massive strides that the Italian club have made under head coach Kieran Crowley this season.

The home side will need to get a point when they travel to Connacht in the final round of matches to secure that home semi-final. They’ll need to improve significantly. Decisions to turn down kickable penalties on half a dozen occasions will always be parsed by hindsight when a team loses and it’ll be no different here.

To compound a disappointing night Sean O’Brien appeared to take another bang on his shoulder and did not reappear for the second half. It was his first game back since playing in West Wales in early March. The home side were second best too often in the collisions, and could make little headway either on the fringes or through the midfield.

Max Deegan stood out, Jordan Larmour was bright, Jordi Murphy worked his socks off but lacked cohesion that can’t be completely explained away by the wholesale changes from the last match.

The Benetton pack put in a Trojan performance up front and their backline stretched Leinster, arguably more often and to greater effect than the other way around.

Leinster bustling intent from the first whistle saw them put pace and width on the game and in doing so Barry Daly and Max Deegan both found space close to the touchlines to stretch their legs without managing a definitive line-break that led to points.

The home side took the lead in a prosaic fashion on six minutes. Joey Carbery kicked a penalty to the corner, Ross Molony won the lineout and just shy of the tryline Richardt Strauss, making only his second start of the season, broke off to force his way through the last tackler. Carbery kicked the conversion.

Benetton responded four minutes later with an identical try to Leinster’s in origin and execution, kicking a penalty to touch and then mauling the home pack over their line from eight metres with a further symmetry in the try scorer, hooker Luca Bigi. Tommaso Allan failed to tag on the extra points but the Italians had fought their way back into the game, trailing 7-5.

Emboldened by the try, the visitors showed some excellent attacking endeavour, albeit facilitated by some sloppy Leister turnovers. Benetton willingness to take quick throws, use the expanse of the pitch, employ clever dinks over the top of the Leinster defence all the while maintaining a high tempo, led to some uncomfortable moments for the home team. Fergus McFadden was his side’s saviour on one occasion.

Leinster were looking for a spark and it came in the form of a break from fullback Jordan Larmour, his footwork and acceleration taking him around one tackler before being hauled down inside the Benetton 22. The visitors were penalised at the ruck but Benetton did well to initially defend the lineout maul and the turn over possession in the shadow of their posts.

Leinster captain Jack McGrath twice turned down kickable penalties in favour of scrums and his calculated gamble paid a lucrative dividend from the second. Carbery swept to the blindside, did well to hang onto Jamison Gibson-Park’s high pass, and linked with Larmour, and the timing of his pass allowed Daly to finish smartly in the corner for his 11th try of the season.

Carbery failed with the touchline conversion but Leinster had forged a hard-fought 12-5 interval lead. There was much to admire in that half about the way Benetton conducted themselves on both sides of the ball, especially after conceding that early try.

Leinster were unable to get the penetration they wanted either on the fringes or through the midfield so they were resigned to shuffling ball laterally or forcing the pass, neither of which was conducive to breaching the Benetton defence.

O’Brien departed at half-time to be replaced by Peadar Timmins and just four minutes after the restart, Leister again turned down an easy three points in favour of kicking a penalty to the corner but despite a brilliant surge from the outstanding Deegan, the home side turned over possession.

The Italian side made the most of the respite and within 90-seconds had their second try; Jayden Hayward beat McFadden in the air to Tito Tebaldi’s clever chip and flanker Federico Ruzza was on hand to take the inside pass and dot down unopposed. Allan missed the rather straightforward conversion.

Leinster then lost Rory O’Loughlin, the centre caught full-in-the-face by a clearance kick which pole-axed him and after prolonged treatment he was escorted from the pitch. It required a reshuffle in personnel terms with Larmour moving to the centre, Daly to fullback and Adam Byrne coming in on the wing.

Things continued to spiral downwards from a Leinster perspective, McGrath’s wild pass hit the groud 10-metres behind the intended recipient and Allan was the sharpest to react, hacking the ball on twice, before winning the race to the touchdown. The Benetton outhalf tagged on the conversion to nudge the visitors ahead, 17-12 after 54-minutes.

When Leinster were awarded a penalty a couple of minutes later, there was no question of going for the corner, and Carbery reduced the arrears to two points. Leinster coach Leo Cullen all but emptied the bench in search of fresh impetus and some game management. Ross Byrne came on at outhalf with Carbery shifting to fullback, the props were changed and Nick McCarthy replaced Gibson-Park.

Tebaldi received a yellow card for what appeared to be a double stamp on Deegan; it could have been red. Benetton won a scrum penalty, kicked into the Leinster 22, won the lineout, picked and jammed their way to within eight metres of the Leinster line before Jordi Murphy forced a crucial knock-on and turnover.

Continuing to be dogged by basic errors, Leinster couldn’t muster the field position they craved as the visitors tackled like dervishes, until restored to their full complement on Tebaldi’s return. Despite their slender lead Benetton stayed true to their expansive attacking patterns, stretching the home side and even when Leinster got to fire one last shot, it was a blank, once again turning over possession.

So at the 18th time of asking in all competitions, an Italian club finally won in Dublin, and few could quibble. They were deserving victors, much to the delight of their small, but vocal band of supporters who roared the team to the final whistle, the performance also acknowledged in an ovation from the locals.

1 In turmoil on and off the pitch: Where did it all go wrong for Barcelona?
2 Limerick’s Shane Dowling forced to retire at 27
3 College football turns blind eye to Covid-19 by risking players' health
4 The Best Of Times: Harrington stares down Garcia in epic Claret Jug battle at Carnoustie
5 ‘Several’ players have withdrawn from snooker World Championship
Real news has value SUBSCRIBE

Six to go forward for Aidan O’Brien in Saturday’s Epsom Derby 15:15
‘Several’ players have withdrawn from snooker World Championship 13:48
Limerick’s Shane Dowling forced to retire at 27 12:43
Martina Navratilova a leader in her time, and for ours 11:59
In turmoil on and off the pitch: Where did it all go wrong for Barcelona? 11:47
Here is your handy guide to sport on television this week