Joy Neville: Working in a male-dominated world is what I know 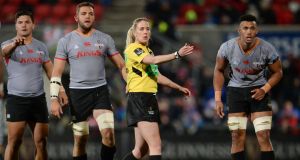 Referee Joy Neville during the Guinness PRO14 Round 14 match between Ulster and Southern Kings at Kingspan Stadium, in Belfast. Photo: Oliver McVeigh/Getty Images

Joy Neville never wanted to be a referee. The former Ireland rugby captain had only just retired – euphoric after winning the Six Nations in 2013 – and was planning some quality time with her family, when then IRFU’s referee development manager, David McHugh, called and asked if she would consider a career change.

“Absolutely not,” came her reply, “I thought it was a thankless job.” But McHugh wouldn’t let it go. So Neville picked up the phone to one of the most senior and respected men she knew in rugby union, and asked him if he thought a woman could ever referee the top men’s division in Ireland. He said, “Joy, not in my lifetime.” “So I called Dave back and said, ‘Right, I’m in’,” chuckles the 34-year-old.

Not only did Neville successfully go on to referee in Division 1A of the Ulster Bank League but over the past five years she has set multiple milestones, culminating in a remarkable 12 months in which she has become the first woman to officiate a Pro 14 match, the first woman to officiate in the Challenge Cup, and along with Spain’s Alhambra Nievas, one of the first women to officiate a men’s international match when she took charge of Norway v Denmark. In what marks a remarkable trajectory for the once reluctant official, Neville was also awarded Referee of the Year in November 2017, following her performance in the women’s World Cup final.

After that the tributes poured in, including Ireland’s president sending a congratulatory tweet. “I did not fully comprehend what a big deal [the award]was,” she says now, “probably down to naivety. I was told [the result]beforehand but I actually thought there were two categories: male and female. I didn’t know it was for the overall category until I went up to receive it. I was blown away. The last year has been amazing.” To top it off, on Sunday Neville received yet another gong at the Irish Person of the Year awards.

Along the way she has developed a thick skin and a wicked sense of humour. When, early on, a groundsman asked her if a female could really be a referee, she grabbed both boobs, grinned and quipped, “Yep, last time I checked.”

“It’s funny because people say how are you coping in a male dominated world? But I don’t know anything else.” Growing up in Limerick, with four rugby-playing older brothers, Neville frequently clashed heads in the back garden.

When she was eight she broke her nose so badly she could see it through her right eye. “To this day I can’t breathe properly. I have so much trouble with my sinuses, my wife’s always telling me to get it fixed.” During a kickaround in the local park, she went to save a ball and dislocated her thumb. “My brother Gary popped it back in but I still can’t hold a pint.”

Back then there was little rugby provision for girls. So Neville started in earnest, aged 17, following a chance meeting with former Ireland international Jackie McCarthy at the local leisure centre. “Eight months later I was in the Munster squad.” It was her brother Dave (the one who broke her nose) who predicted she would captain her country one day – after he’d taught her how to tackle. “He took me down to the park and a couple of hours later the two of us could barely walk home. A few months after that I got selected for Ireland.”

Not yet under the IRFU, women’s rugby was hugely under-resourced at the time, and Ireland regularly lost by big margins to England and France. “It was tough, we slept on each others’ floors, we chipped in for lunches.”

The 2012 Six Nations provided a watershed moment. As the squad travelled to France they were forced to take an overnight train in an horrendous 17-hour journey, arriving in Pau on the morning of the match. Ireland lost by a point, and the IRFU were roundly criticised. The following year, bolstered by new resources, Ireland won the Grand Slam.

Neville says to this day she doesn’t know what McHugh saw in her. Perhaps it was her ability to outwit the referee. Former Ireland captain and friend Fiona Coghlan still ribs her about the time analyst Dave McBrien came into their dressing room and highlighted Neville’s illegal moves. “My name kept cropping up,” says Neville, laughing, “it’s a running joke between Fiona and I. I knew how to get away with things. It’s part and parcel of 11 years on the international stage.”

But for the poacher turned gamekeeper, that experience is proving a distinct advantage. “Oh I’ve had conversations with players, like, “I love your style … except I know exactly what you’re doing. Don’t do it again.” I think they admire the humour. Having been a player myself I have an understanding of what they’re trying to achieve, and my approach is probably softer than most referees.”

Starting out, however, was a disaster. She was going into each game expecting to be as polished in officiating as she was in playing. She was also painfully conscious of her gender. “At first I was very stern. I probably had a barrier up because I was very concerned that being a female would impact on how the players saw me – bearing in mind most of them would never have had a female refereeing them. I was worried that if I went in too soft they would take advantage of that. But when I reflected I thought to myself: Joy what are you doing? When you were a player how would you like to have been treated? And so that’s how I approached it after that, and it’s been way more successful. Once you have players on your side it makes your job a lot easier.”

“As a player I remember saying to referees, “You missed that call” and they’d say, “No I didn’t” and I really didn’t respect them. You could tell by their body language that they knew they’d got it wrong. I brought that into my game. A player said to me, “Ah ref you missed that,” and at the next break in play I said, “You know what? You’re dead right, I’m really sorry lads.” They said, “It’s fine.” They respect it if you put your hand up and admit you’ve got something wrong.”

It was her wife, Simona who convinced Neville to stick with refereeing. The two were married in 2015, weeks after Ireland voted in favour of same-sex marriage.

“Compared to other countries around the world we’ve come an awful long way, and what I’m really happy about, everything I’ve done, the main topic has been me being a female in a male dominated world and there’s been no talk about “the lesbian female”. I’m really, really proud of that because I think sexuality doesn’t define who you are. That’s a mark of where we are in society.”

Neville will oversee the women’s World Rugby Women’s Sevens Series in Japan this weekend, but her long-term goal is to run the line at the men’s Six Nations. “I assisted in the international Tier 1 matches so that shows I’m in the sight of the selectors, so it’s about maintaining high standard performances. If it happens it would be an amazing thing to achieve, and if it doesn’t, well, it wasn’t meant to be and I’ve done so much already I’m very lucky and thankful.” – Guardian service

1 Tipping Point: DeChambeau’s transformation raises questions, but who will ask them?
2 Ken Early: Resurgent United can be the top team – in Manchester
3 Monica Seles: The warrior queen who could have been the best ever
4 All in the Game: Dugarry apologises to Messi for ‘half autistic’ jibe
5 Mental clarity in chaos: Novak Djokovic, the man who turned two into three
Real news has value SUBSCRIBE