Leinster head coach: ‘It is very much a clash of styles about how you assemble a squad’ 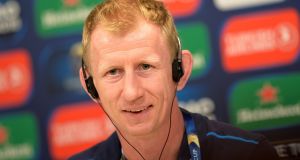 Leo Cullen has a glint in his eye.

“When you got Dan Carter on your bench it says it all really.”

The coach has played this tune a few times. Having struggled out from underneath the weight of Toulon’s million Euro spree in the (pre-Lancaster) winter of 2015, the 40 year old could enjoy a scorching Basque sun as Leinster close in on a fourth European title - he captained them to the other three - with their schools factory churning out astonishing talent like Jordan Larmour, James Ryan and Dan Leavy.

Note: the 22 degrees will plummet to a showery 13 degrees by Saturday’s 4.45pm kick-off.

Of course Cullen will do nothing of the sort - too many small jobs - but the backhanded compliment stands: “What Racing have assembled in the last seven, eight, nine years - an expensive bunch of players. We have to do things slightly differently in Leinster where we produced guys from within mainly.

“We brought in a few key signings from overseas but it is very much a clash of styles about how you assemble a squad. We are under no allusions that it’s a very formidable bunch of players that we are up against tomorrow.”

Flanked by his captains, Isa Nacewa and Johnny Sexton, Cullen has earned the right to beat this drum.

“It’s one of the great challenges that we face as a club - when you see some of the French teams and the resources that we have available and the calibre of players that they have been signing over the last couple of years.

“Yeah, it’s a great challenge for us.”

It’s beyond ridiculous that 22 of the 55 players Leinster have needed this season (37 in Europe) will find themselves in west London playing the last ever British and Irish Cup final at 2pm tomorrow. Max Deegan is the most undeserving runner at Trailfinders Sports Club (capacity 3,020) after Rhys Ruddock did enough to make the bench ahead of Ross Molony.

James Lowe must also sit in the shade because Cullen needs to put Jamison Gibson-Park on the bench.

“It’s not just James. There’s a whole host of players we’ve had to have difficult conversations with this week.”

Nacewa gets reminded about his impending retirement. We seek a tearful farewell into a microphone that can be translated into French and Spanish.

“No emotions. It’s just another week for me.”

Here in Bilbao on a beautiful summer’s day, Sexton is inevitably asked about facing his former club.

He has been racked with nerves all week.

“The older you get the nerves get worse but the way you deal with them is a little bit better.”

This is the best news any Leinster supporter could hear. The 32 year old felt this way before the 2012 miracle final in Cardiff. Same sleep deprivation before the All Blacks were torn open last summer. And he had a miserable week before the Paris drop goal in February.

“It will be a special game for me, you know, playing against a lot of my friends. A lot of the staff who I haven’t seen for a few years I’m looking forward catching up with them after the game.”

Sexton will need to forgive and forget as Bernard Le Roux or Virimi Vakatawa will eventually bash into him as much as he seeks to out manoeuvre them.

“We can’t go out and play the way we did against Scarlets. We got to change it up a little bit but still keep the fundamentals of our game.

That’s the big challenge: can you beat a Scarlets-type team and beat a team like Racing who are very different?”

“That’s what champions do.”

He would know. A fourth star on the jersey, like the other three, comes down to him.