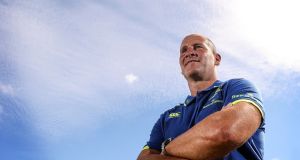 Leinster senior coach Stuart Lancaster: “With Leinster I was lucky in that I came into a team that has a strong culture and a very strong identity because 90% of the players are born in Leinster.” Photograph: Dan Sheridan

Perhaps in the darkest hours of World Cup 2015, Stuart Lancaster was guided by Winston Churchill’s reverberating utterance that “success is not final, failure is not fatal. It is the courage to continue that counts.”

Any English coach would embrace a career comparable to the two-time PM’s political odyssey. Age 48, he still has time. The European trophy is yet to be won, in this his first major club role, but Lancaster’s second coming has commenced.

On Monday his distinctly Anglo-Saxon surname was removed from the Harlequins short list. Not while the Champions Cup final looms, not while the former Scotland under-21 flanker is helping to revive a dynasty that hardly crumbled into ruin.

“If you want to build a team you’d love to get the culture right first,” he replied to a Basque reporter who invoked Johan Cruyff’s Barcelona while seeking to describe Leinster’s blossoming squad. “And get a strong sense of identity. With England that’s what I tried to do when we took over in 2011/12.”

“With Leinster I was lucky in that I came into a team that has a strong culture and a very strong identity because 90 per cent of the players are born in Leinster. Which is incredible...I haven’t had to do too much. I have just come in and learned about it, tried to embrace it, live here, feel part of the community. If you do that it is a very powerful force.”

Incidentally, Rathmines to Yorkshire is half the commute Lancaster did for eight years up and down to London while reshaping the England academy before coaching the national team, a period that will forever be drenched in spectacular failure.

Under Lancaster England finished second in the Six Nations four seasons running. There followed the World Cup misadventure where the Sam Burgess selection and inability to stabilise the midfield proved substantial in their undoing.

“I inherited the job back in 2012 in difficult circumstances,” Lancaster told Newstalk’s Joe Molloy in December. “A lot of people have forgotten the context.”

England’s World Cup in 2011, under fast-tracked hero Martin Johnson, collapsed amidst dwarf throwing and Manu Tuilagi diving off the ferry in Auckland harbour.

“Not just that. Within the RFU there was no CEO, no chairman, there was a lack of connection with the clubs, commercial partners were walking away. There was a whole host of things beyond trying to win some rugby games.”

Persistent noises about Andy Farrell being the real coach gave the media a stick to beat the inexperienced Lancaster. A supposedly complimentary book – The House of Lancaster: How England Rugby was Reinvented – before the 2015 tournament stated it was “not immediately obvious that he was the leader” at training sessions, while describing Farrell as the “pulse of the team”.

English failings – administratively and on field – lost two brilliant coaches to the Irish system. They may yet be reunited on this island.

Lancaster put the England house in temporary order but a heavy bombardment was inevitable once Wales sacked Twickenham, with former captain Will Carling front of the queue. “I’ve listened to Stuart Lancaster say for years that ‘I don’t have the leaders and therefore we’re having to make all the decisions as coaches’. It’s a very classroom-orientated environment.”

This clearly is no longer the case (if it ever was).

All the lessons he has absorbed from great coaches have made him the complete player. Then you layer on his commitment to Leinster, his desire to win things, his competitiveness

“[Failure] certainly makes you more determined when you have been through it and come out the other side,” said Lancaster. “But from a personal point of view you want to do it for your family, because they’re the ones who have supported you through all the tough times. My wife and kids and family and friends, that’s the motivation for me.”

That’s what was so gut-wrenching; helplessly witnessing the anguish of his parents on their Cumbria farm and teenage children after England were humiliated by Michael Cheika’s Wallabies.

“Before I left I warned the RFU board that Stuart was not the right man for the job,” said Martyn Thomas, the former RFU chief, back when everyone was taking aim. “He had not played or coached the game at the top level, and does not have the technical experience or expertise to cut it at international level.”

The Stuart Lancaster that Leinster players encounter on a daily basis must be a different person.

All is not yet forgiven – as Rob Andrew’s book-selling brickbats revealed – but Lancaster the coach was set on a path to redemption when a Johnny Sexton text message convinced him he was wanted in Dublin.

“It’s the bit behind the scenes, that you don’t see, that is the key to Johnny,” he enthused. “I’ve loved coaching him. His knowledge of the game and his ability to use that knowledge in the heat of battle is incredible. An international player would see the gap; a world-class player like Johnny would be through the gap.

“All the lessons he has absorbed from great coaches have made him the complete player. Then you layer on his commitment to Leinster, his desire to win things, his competitiveness and his desire to keep playing until he is 40...”

Lancaster put Tom Brady in Sexton’s head. “I think his wife is a bit upset with me because I can see the comparison. Honestly, I can.”

The slim build. Composure amidst the chaos.

“When I started watching the Patriots and understanding how they went to five Super Bowls and Tom Brady is the quarterback who has done it, I could see it. I found little clips and kept seeding them into Johnny.”

“So does Johnny. Trust me, he is always in a red bib in training so we look after him.”

“I don’t think either of us need to, or want to, be front and centre all the time. Leo’s got great integrity, he’s got unbelievable work ethic, and he’s very good on the managerial side of things, and he’s very honest with the players.”

Ireland and England are hiring new head coaches in 2019. Indications are that the IRFU will promote internally with Farrell perfectly positioned, having signed a contract up to June 2020, for promotion. Leinster will quietly resist approaches for their master tactician in the same manner they failed to keep Joe Schmidt.

Either way, failure need not be fatal as much as success is not final.