Leinster and Racing name their teams for Saturday’s match in Bilbao at 4.45pm 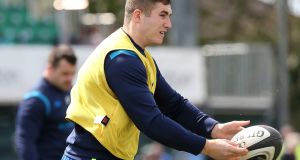 Jordan Larmour is in the Leinster starting XV for the Champions Cup final. Photograph: Gary Carr/Inpho

Leinster and Racing 92 have named their teams for Saturday’s Champions Cup final in Bilbao, with the Irish province making two changes from their semi-final win over Scarlets.

As reported by John O’Sullivan and Gavin Cummiskey earlier this week, Jordan Larmour starts on the wing for Leo Cullen’s team. Fergus McFadden is ruled out with injury.

Luke McGrath wins his fitness race, but due to concerns relating to his ankle injury, Jamison Gibson-Park who started the semi-final is included in the replacements. Leinster are only permitted two foreign players under the tournament rules, therefore James Lowe misses out on the matchday squad.

Rhys Ruddock has proven his fitness and takes a place among the replacements, alongside Joey Carbery and Rory O’Loughlin.

Dan Carter must make do with a place on the bench for Racing 92 who have opted to stick with Marc Andreu on the wing, despite speculation that the 6ft Puma, Juan Imhoff would replace him to add to Racing’s aerial game.

While in the frontrow Cedate Gomes Sa has got the nod at tighthead ahead of Ben Tameifuna, with the Paris club again opting for the greater mobility of Gomes Sa who started in their semi-final win over Munster.

1 Rodgers shunned by some family members for leaving Celtic
2 Connell losing touch with club championship is real tragedy of Normal People
3 ‘A radical departure’: Who are CVC and what are their plans for rugby?
4 Fitzgerald says inter-county game should resume before club fare
5 Colin Kaepernick’s exile is too fresh for NFL to speak out on US protests
Real news has value SUBSCRIBE