Munster show their trademark resilience to get over the line

European hangover still evident, but van Graan’s side do enough to pip Edinburgh 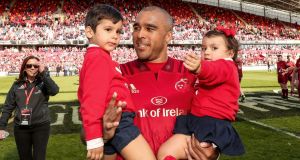 Munster’s Simon Zebo with his son Jacob and daughter Sofia after his final hope appearance for the province in the victory over Edinburgh at Thomond park. Photograph: Billy Stickland/Inpho

Munster have always been something of a law unto themselves and this performance has to be put in perspective.

Following on from their latest European semi-final exit, they were never going to scale the heights. As expected, there was a palpable sense of another European hangover about the place, with a crowd of 10,205 in sharp contrast to the capacity attendance which helped them beat Toulon by a point here five weeks ago.

More than anything, Munster’s confidence had clearly taken a jolt. There was a lack of intensity as well as confidence and accuracy in their rugby, witness the official statistic of 38 missed tackles (surely some mistake?). It took them about half an hour to bring some defensive line speed to the occasion, something they’ll presumably not repeat at the RDS.

Ultimately, working off 38 per cent possession and territory, Munster were indebted to their scrambling defence, an opportunist try by Rhys Marshall, whose performance again put into question his curious demotion against Racing, and a trademark piece of individual brilliance by Simon Zebo. A typical zippy finish by Keith Earls, razor sharp again, along with their desire and endgame management saw them over the line.

Edinburgh, lest we forget, were the Pro14’s form team going into the play-offs, with eight wins in their preceding nine games, including an impressive victory over Glasgow the previous week.

Had Munster not had the character to dog it, this could have been a dreadfully anti-climactic end to their season. This was an altogether more fitting Thomond Park farewell for their all-time record try-scorer Simon Zebo especially, hopefully more a bientot than au revoir.

There was no try here, but something every bit as good. Attempting to gather a pass above his head that was intended as a skip pass for Billy Holland, Zebo retrieved the ball behind him and, noticing that Nigel Owens was about to whistle the end of an advantage play, had the ingenuity to chip, gather and spin a long right to left skip pass to Earls.

It was by some distance the play of the match as well as the match-winning play, and demonstrated how much Munster are going to be miss Zebo’s X-factor, as well as the strength and skills of the departing Gerbrandt Grobler and Robin Copeland.

“What he has is something that I think you’re born with or you can’t really be taught, that kind of killer instinct,” said Peter O’Mahony.

“It’s certainly hard to replace. I’ve played a lot of rugby with him and he brings that little bit extra, that little bit of something special and you saw that today. The performances he can put in, the little magic moments where the game is as good as a stalemate and he makes the difference. He’s a special player.”

“Very much so. I said to the team inside, since I came, the thing we will miss most is his smile and his attitude. He’s his own man and such a fantastic Munster man.”

“He was part of a back three that played really well today, I thought the back three as a unit really did well, but there was one or two moments from Zeebs. Firstly, to see that chip and that pass was pretty special. We’re going to miss him as a Munster man.”

There were plusses for the future too though, not least the 22-year-old Ciarán Parker manfully filling the void created by Stephen Archer’s 17th minute departure in the absence of John Ryan and Brian Scott.

In arguably the most significant outing at ‘10’ JJ Hanrahan has been entrusted with, in his 83rd appearance, the Kerry outhalf delivered. Hanrahan was as guilty as Rory Scannell and Zebo for inviting counter-attacks from the dangerous duo of Blair Kinghorn and Duhan van der Merwe with one aimless kick down the middle.

But there was also a pinpoint touch-finder in the preamble to Marshall gathering a Stuart McInally overthrow, and stepping van der Merwe before taking tackles by Sam Hidalgo-Clyne and McInally to score.

Hanrahan followed that up with a finely judged conversion into the slanting breeze from wide to the right, and despite missing one 40 metre penalty landed the touchline conversion to Earls’ try as well as a clutch kick from 40 metres to give them a four-point buffer for the last eight minutes. There was also some nice passing in what was, overall, a satisfying 80 minutes’ work – the 80 minutes being another significant factor.

“JJ has knocked on the door for the previous six weeks. I think he deserved this opportunity and the way that we wanted to play with some of our decisions, we went with him for this game. I thought he did really well, one or two things to work on, but pretty happy with his performance.”