Player beating at Andy Farrell’s door, but logjam at Ireland’s inside centre an obstacle 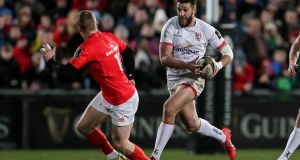 The three rounds of festive interpros can be a mixed bag, and certainly didn’t offer much in the way of cheer for Connacht or, ultimately, Munster. Having home advantage in two of the three games is decidedly helpful, and this season’s half-dozen derbies were a particularly peculiar snapshot in the season given the need to afford Ireland’s World Cup players a fortnight’s respite in the midst of a 13-month season.

They were not a vintage series, with too many lop-sided encounters, none more so than last weekend. Nevertheless, they’ve given Leinster (14 points out of 15) and Ulster (11 points) real momentum going into the final two rounds of the Heineken Champions Cup pool stages.

In the process, in-form Ulster players further pressed their claims in their commanding rout of Munster at the Kingspan Stadium: John Cooney, most obviously, along with Rob Herring, Jacob Stockdale and Stuart McCloskey.

McCloskey is on fire right now and appears to have become a more rounded player. Speaking on the Second Captains podcast on Monday, his former midfield partner Darren Cave maintained that McCloskey is merely maintaining his form of the last few seasons, and that his passing was always an under-utilised skill.

However, it does seem as if McCloskey has improved his passing and his decision-making this season. There was ample evidence of this in his sensational performance against Munster last Friday night.

He was the creator-in-chief of three of their tries – and there would have been another following his dummy offload to Luke Marshall (so deft you could almost miss it but for slow-motion replays) before offloading to Billy Burns, only for Will Addison to lose control of the ball when charging for the line.

There was McCloskey’s sweetly timed pass to release Stockdale for Cooney’s sixth try in his last seven games, the long skip pass with a penalty advantage to Marshall for Robert Baloucoune’s try, and then the trademark carry up the middle before, two phases later, drawing two men and putting Matty Rea over.

Topping off all of that, McCloskey trucked up more lineout ball to take in two men and present quick ball; two phases later, when Cooney had to help secure ruck ball under the Munster posts, the Ulster centre picked up and withstood tackles by John Ryan, Darren O’Shea and Sammy Arnold for his own try.

Under Dan McFarland and  Roddy Grant, Ulster have built solid foundations in their scrum, lineout and maul

He’s also added an attacking kicking game to his arsenal. As eye-catching as anything McCloskey has produced this season was the deft left-footed grubber which led to a try by Luke Marshall in their European win away to Harlequins. Even Cave conceded he hadn’t seen that in McCloskey’s locker previously.

Ulster will be further strengthened for Saturday’s pool decider away to Clermont Auvergne on Saturday by the anticipated return of Marcel Coetzee’s ball-carrying in tandem with McCloskey and Iain Henderson.

Under Dan McFarland and forwards coach Roddy Grant, Ulster have built solid foundations in their scrum, lineout and maul (a revived weapon), and a defence overseen by Jared Payne which, admittedly, will receive its ultimate test at the Stade Marcel Michelin.

With their emphasis on a high-tempo game, Ulster are also scoring freely (16 tries in their three interpros, while eight of 10 conceded were against Leinster when four academy or sub-academy players made their debuts). Attack coach Dwayne Peel appears to be having more influence this season and one ventures that, akin to the largely unheralded Dave Ellis at Connacht in their Pro12-winning campaign under Pat Lam, McFarland and operations director Bryn Cunningham made a very shrewd appointment in Kiwi Dan Soper as their skills coach.

No less than the 29-year-old Cooney, at 27 McCloskey’s more complete game has hardened the case for his promotion by Andy Farrell for the forthcoming Six Nations more than at any point under Joe Schmidt.

McCloskey has won only three caps, performing creditably when pitched in for his debut against England in the Six Nations at Twickenham all of four seasons ago, since when he started the wins over Fiji and the USA in November 2017.

But in the prevailing climate of any stick for Schmidt will do, when it comes to analysing why McCloskey’s face “didn’t fit” under the previous head coach, it’s important to consider something else. While Cooney has to dislodge a world-class incumbent in Murray, the logjam at inside centre has been even more concentrated.

Although Schmidt almost never had Robbie Henshaw, Bundee Aki and Garry Ringrose fit simultaneously, he usually had two of them, as well as Chris Farrell – who ironically moved on from Ulster because of the midfield logjam ahead of him there in the shape of McCloskey and others.

Henshaw, lest we forget, is a Lion who has been an excellent defender for Ireland, making late adjustments and good reads such as his superb tackle on Israel Folau in the win in Melbourne in 2018.

He’s also been one of the team leaders while Aki has been superb in a number of huge wins, capping off a brilliant Grand Slam campaign with that big game in Twickenham. Henshaw and Aki were stand-out performers at 12 in the respective wins over the All Blacks in Chicago and the Aviva Stadium.

Unlike McCloskey, who is more of a specialist inside centre, Aki and Henshaw can seamlessly switch to outside centre during a game, an important consideration for Andy Farrell and Mike Catt, as it was for Schmidt.

For sure, no less than Ulster teammates, another big performance by McCloskey against Clermont would make his case even more compelling.

But, with Ringrose and Farrell in the mix, in order to pick McCloskey, Ireland would have to omit both Aki and Henshaw.