Gerry Thornley: Can Leinster go through the season undefeated? 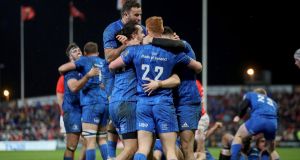 Double champions two seasons ago, within one game of repeating the feat last season and now well on course to be in the knock-out stages of both competitions for the fourth season running. World Cup or no World Cup, the Leinster Machine keeps on churning out the players and the wins.

They are the only unbeaten side in any of the three major leagues. Played 13, won 13. The closest to them are Exeter, who have won nine of their 11 games in both competitions this season.

Leinster’s average winning margin so far this season is almost 20 points but for a team to keep winning all the time, no less than Liverpool, sometimes you have to win ugly, and Leinster’s 13-6 win over Munster in Thomond Park was a repeat of their win by the same score in Lyon in round two of the Heineken Cup.

One suspects they are also, probably, the two victories that have given the squad the most satisfaction in many ways.

In tandem with their other one score-win this season, that 3-0 victory in Zebre at the end of October, the common ingredient was keeping the home side tryless.

Ala Munster in the aftermath of Saturday’s game, Lyon’s blunt route one performance drew criticism for its limitations, and surely never before in his career has a side with Stephen Larkham as either player or coach not once completed three successive passes.

Furthermore, whereas Leinster were rewarded for their willingness to pass and run into the second-half wind, Munster seemed caught in a tactical straitjacket whereby their scrumhalf Nick McCarthy regularly box-kicked into the elements in the first half.

You felt some empathy for the ex-Leinsterman, not least as having to clear Devin Toner meant his kicks were even more likely to boomerang back.

By contrast, the impressively sharp Rowan Osborne and Hugh O’Sullivan had more protection and less of a man mountain to clear, while Ross Byrne also happily assumed responsibility for dictating their game into the wind, even carrying repeatedly and effectively. (Felipe Contepomi’s influence was again palpable. Or maybe Byrne felt the heat from younger brother Harry’s performance against Ulster. Or both.)

So, with less possession (48 per cent), Leinster made significantly more passes, 152 to 122. Curiously, Munster seem almost to have two different games for the Pro14 and Europe.

But even allowing for the narrowness of Munster’s attack, and preponderance of one-off runners or pick-and-jams, Leinster’s ‘D’ was exceptional. As in Lyon, they seemed to take an almost spiteful pleasure in keeping their try line intact, most notably in that defiant ten-minute spell against the Top 14’s second-placed side when Jordan Larmour was cooling off in the sin bin.

It’s worth noting that it remains Lyon’s only defeat at the Stade de Gerland in 14 matches dating back to last March, and their average result in their other eight home games this season is 38-10.

As for toppling Munster in Thomond Park, well it was the latter’s first defeat in their Limerick citadel for 21 games, dating back to Leinster’s win there two years ago to the week. Put another way, Munster’s only two defeats in their last 31 games at Thomond Park have been to Leinster.

Before the game, Jerry Flannery highlighted Leinster’s defence on eirSport and pinpointed their decision-making at the breakdown as key. For the most part, the tackler bounces quickly to his feet and they rarely commit more than one or two players, thereby keeping 13 or 14 players on their feet, while invariably forcing the attacking team to commit four or five.

But then, when the second man in opts to contest for the ball, he usually does so tellingly.

As an example of the pride Leinster take in their defence, and their work-rate, Flannery cited their endgame away to Glasgow, when despite winning 23-10 in overtime, they defied the home side for 31 phases before Devin Toner came from the openside to help Osborne in completing the blindside double tackle into touch which ended the game.

It helps when you have a couple of insatiable, robotically efficient tacklers at open side who lead the line up so sharply. Where, typically, Josh van der Flier led the count against Northampton away with 20 tackles, and one missed, while making 17 tackles in Lyon (second only to James Ryan’s 18) last Saturday the equally indefatigable Will Connors made 23 (and missed none) of Leinster’s 193 tackles.

Connors made some super reads (and also carried 11 times) and as Flannery forewarned, Leinster’s identification at the breakdown bore a rich dividend.

The upwardly mobile Caelan Doris won a couple of excellent turnovers and after Leinster repelled a 38-phase, four minute-plus attack entering the last the ten minutes, they held out a ferocious Munster maul before Connors chop tackled the replacement hooker Diarmuid Barron and Scott Fardy was immovable over the ball to win Leinster’s sixth breakdown turnover of the night.

Ross Moloney’s subsequent lineout steal completed the deal and Leinster’s celebrations told you what it meant.

Stuart Lancaster – what a capture – oversees their defence, but the individual and collective technical work of their skills coach Hugh Hogan in the tackle and at the breakdown is further evidence of Leo Cullen’s shrewd eye for appointments.

Could Leinster go the season unbeaten?

A two-week trek in the fortnight between the Six Nations and the Heineken Cup is less than helpful. Up to another 20 games await, and all manner of pitfalls, while from this point on last season Leinster still lost four games.

But one of those (Thomond Park) has been negotiated and Leinster, all the more so with that defence, remain the only ones that can.

1 Farrell and O’Connell provide insight into changes in Ireland’s analysis
2 Sideline Cut: Vignette shows why Bird is the true shark in The Last Dance
3 Anfield and Cheltenham show sports again lacking in looking after their own
4 Andrew Porter diary: Meat, veg and intermittent fasting the order of the day
5 2019-20 FA Cup final rescheduled for August 1st
Real news has value SUBSCRIBE